Laparoscopic resection of choledochal cysts in adults: a series from Turkey

Objective: Choledochal cyst is a congenital disease in which surgical treatment is preliminary because of the potential for malignancy. In recent years, increase in technological developments and laparoscopic experience have popularised the use of laparoscopy in adult choledochal cyst surgery. This study aimed to present the results of eight adult patients undergoing laparoscopic choledochal excision surgery.

Material and Methods: Patients who underwent laparoscopic choledochal cyst excision and hepatico-jejunostomy anastomoses between the years 2013 and 2018 were evaluated retrospectively. Demographic characteristics, preoperative and postoperative findings, pathological results and final condition of the patients were examined.

Results: Of the eight patients, three were males and five were females. Median age was 41.5 years (22-49). One of the patients had Type IVa and the rest had Type I choledochal cysts. Laparoscopic choledochal cyst excision, cholecystectomy, and hepatico-jejunostomy anastomoses were performed on all of the patients. One patient was converted to open surgery. Three patients had postoperative biliary leakage. Duration of the operations was determined as median 330 (240-480) minutes and blood loss was 50 (10-100) mL. Hospitalization of the patients was median 6 (4-23) days and follow-up time was median 20 (2-65) months. In the late period, cholangitis occured in a patient who was treated with medical therapy and there was no mortality in the follow-up period.

Conclusion: We suggest that laparoscopic choledochal cyst excision in adults may be an alternative to open surgery due to the satisfactory results in the late period in spite of early problems like self-limiting bile leakage.

Choledochal cyst is a congenital disease which presents with cystic dilatation of the biliary tract. The incidence is one in 100.000 and 80% presents in childhood (1,2). Although choledochal cysts were first classified by Alonso-Lej, original classification used today was categorised by Todani (3). According to this classification, there are five types of choledochal cysts and the most common one is type 1; followed by types 4, 5, 3 and 2 in decreasing frequency. Abdominal pain, jaundice and choledochal enlargement, which are usually identified as symptoms triad, are detected in only 6% of the patients (4). Treatment of choledochal cyst is surgical excision and bilioenteric reconstruction due to recurrent cholangitis, biliary stone formation, pancreatitis and risk of malignancy. Recently, minimally invasive approaches have been used in the treatment of choledochal cysts with acceptable morbidity and mortality (5).

Our aim in this study was to emphasize the availability of laparoscopic choledochal cyst excision.

Eight patients scheduled for laparoscopic cyst excision and bilio-enteric reconstruction due to choledochal cyst in our clinic between February 2013 and May 2018 were inluded into the study. The study was conducted in accordance with the Declaration of Helsinki. Patients were operated with their informed consent in technical details as previously described (6) (Figure 1 and 2). Patient demographics, body mass indexes, history of additional diseases, history of previous operations, types of cysts, operation times, amount of blood losses, length of hospital stay, early and late complications, pathology findings and final conditions of the cases were reviewed. 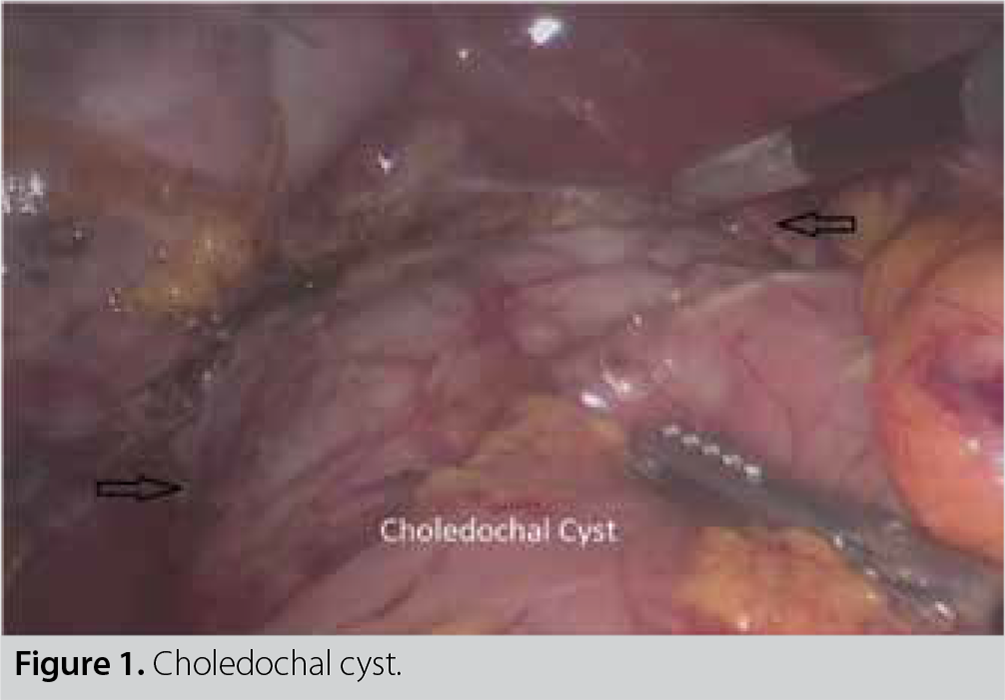 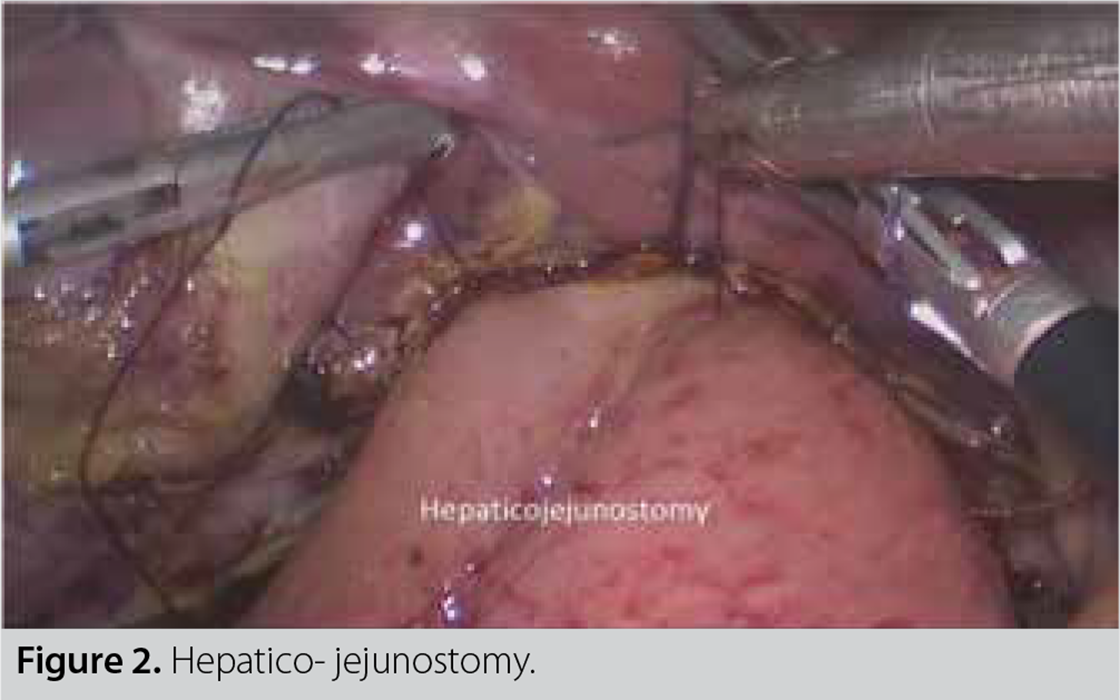 Descriptive statistics were performed for all data. Values were reported in median and range or mean and percentages. The data was analyzed using Microsoft Excel 2013 program.

Sixty-two percent of the patients were females, and mean age was median 41.5 (22-49) years. There were no known comorbidities for all patients. There was a previous laparoscopic cholecystectomy history in one patient. One of the patients had Type IVa and the rest had Type I choledochal cysts. Choledochal excision and hepatico-jejunostomy anastomoses procedure were performed for all patients as surgical treatment. In all patients, surgical procedure was completed laparoscopically. However, after completing the surgical procedure, bile leak was detected from hepatico-jejunostomy anastomoses intraoperatively in a patient and converted to open surgical procedure for revision (14%). Hepatico-jejunostomy anastomosis of the patient was renewed and the operation ended after no problem was detected. Mean duration of the operation was median 330 (240-480) minutes and blood loss was median 50 (10-100) mL. All patients were followed for one day postoperatively in the intensive care unit, and no blood replacement was necessary for any patient. Postoperative bile leak developed in three patients. One of these patients required drainage with relaparoscopy and spontaneous cessation of the biliary leakage occurred in the follow-up. Drainage was discontinued on postoperative 3rd and 4th days in the other two patients with bile leak. Postoperative pneumonia developed in one patient, and the patient was discharged without any problems after medical treatment. Hospitalization time of our patients was median 6 (4-23) days. Examination of the pathologic lesions revealed that all patients were compatible with choledochal cyst while one patient had an additional gallbladder tumor. Liver resection and lymphadenectomy were performed in a second session to the patient whose tumor was T2. Pathologic examination revealed no tumoral tissue in the liver, and all of the lymph nodes were reactive. Follow-up period of the patients was median 20 (2-65) months. In follow-up, cholangitis occured in one patient who was treated with medical therapy, and there was no mortality in the follow-up period (Table 1).

Although choledochal cysts are rare, it is a congenital disease in which surgical treatment has priority because of the risk for malignancy. It is usually seen in childhood, but 20% is detected in adult ages (2). It is detected more in females as in our study. In the surgical treatment of choledochal cysts, hepatico-jujenostomy or hepatico-duodenostomy anastomoses are preferred following choledochal excision. However, considering that pancreaticobiliary reflux after hepatico-duodenostomy anastomoses increases the risk of malignancy in the hepatic hillus, hepatico-jejunostomy anastomoses has become the preferred surgical procedure as it is in our study (7). Laparoscopic cyst excision and bilio-enteric reconstruction are used more frequently nowadays with the developments in minimally invasive surgery. With this application, it has been reported that abdominal wall complications (wound infection and incisional hernia) and peroperative blood loss are reduced. It has also been reported that laparoscopy provides a more detailed image due to its enlargement feature (8,9). However, the application of laparoscopy to biliary reconstructive surgery has been limited in part because of the complexity of these procedures and the need for rigorous surgical technique (8,10). To the best of our knowledge, this is the largest experience in minimally invasive surgery on choledochal cysts in Turkey.

Another limitation of the laparoscopic surgery practice is that it has longer operating times than open surgery. Our median operation time was 330 minutes, and it was reported in the literature with the range of 228 and 395 minutes (7-15). Liuetal et al. have reported that when compared with open surgery, the laparoscopic approach shows a longer operative time (249 ± 58 vs. 132 ± 15 min). Their study has revealed that time of laparoscopic procedure decreases after twenty cases and lasts for up to 190 minutes (9). Therefore, they have shared the idea that after completing the learning curve, laparoscopic procedures would have similar operative times with open operations.

Although literature reveals bile leak rate between 3.6% and 12.8%, it is still the most common complication. However, it usually resolves without any intervention (8-15). The rate of bile leakage in our study seems to be higher than the literature (38.5%). However, two of the three cases with bile leak were spontaneously resolved on postoperative third and fourth days without any additional intervention.

Other complications mentioned in the literature include intra-abdominal collection, hemorrhage, pancreatic fistula, pancreatitis, intestinal obstruction, stricture in hepatico-jejunostomy anastomosis, and wound complications (12). In our series, only one patient (type IVa) was admitted to our hospital with late cholangitis and treated medically.

We suggest that laparoscopic choledochal cyst excision in adults may be an alternative to traditional open surgery due to the satisfactory results in the late period in spite of the early problems like self-limiting bile leakage.

This study is registered at Inonu University Human Ethical Committee as a research. The registration identification number is 2014/33.