Objective: Transplant nephrectomy is a technically challenging procedure with high complication rates. Morbidity and mortality are mostly due to hemorrhage or infection and are reported to be 17-60% and 1-39%, respectively. The most common surgical technique for transplant nephrectomy is sub-capsular, extraperitoneal approach which may result in fluid accumulation and subsequent super-infection. We report that intraperitoneal approach, after assuring hemostasis of the transplant pedicle, allows for passive drainage, decreases hematoma formation and minimizes the subsequent infection risk in the nephrectomy bed.

Material and Methods: From July 2009 to July 2014 a total of 38 transplant nephrectomies were performed using the intraperitoneal window technique at Georgetown University MedStar Transplant Institute (MGTI). Data was collected retrospectively.

Results: Average age at the time of transplant nephrectomy was 43.9 ± 14.3, and the majority were male (55.3%). Mean time to nephrectomy was 71.7 ± 67.4 months following transplantation. Indications for nephrectomy included pain, hematuria, fever, and recalcitrant rejection. Average operative time was 97.1 ± 28.9 minutes, average blood loss was 172.5 ± 213.6 mL. A total of 9 (24%) complications occurred. Postoperative blood transfusion was the most common complication (15.7%) followed by 2 (5.3%) re-interventions; one take back for hematoma and one percutaneous drain placement for symptomatic fluid collection. We had no infection, postoperative sepsis, ICU admissions, or mortality.

Conclusion: Transplant nephrectomy with peritoneal window is a technique with better results compared to the literature. An opening between the transplant cavity and the peritoneum allows for passive drainage of fluid and minimizes the risk of hematoma and abscess formation. This approach does not add significant time to the operation, furthermore it may decrease morbidity and mortality by reducing overall complications, namely hematoma formation and infection, which overall decreases rates of re-interventions and length of hospital stay.

Renal transplant has a failure rate of 12-22% by three years, and 44-59% by 10 years (1). A failed transplant provokes an inflammatory response which increases morbidity and mortality. It also incites symptomatic intolerance in patients (2,3). Therefore, anywhere between 4.5-84% of those failed renal grafts require transplant nephrectomy (4). Although there are different opinions on the timing of transplant nephrectomy, current consensus is that removal of the failed graft is appropriate when symptoms are intractable (4-8).

The most common indication for transplant nephrectomy is symptomatic chronic rejection (58.2%) which can cause graft tenderness, hematuria, fever, and persistent anemia (9,10). An obvious benefit of nephrectomy is the relief of symptoms from allograft rejection or failure. Lopez-Gomez et al. have demonstrated attenuated inflammatory response after removal of a failed allograft when compared to failed graft patients treated with hemodialysis only. They have found decreased inflammatory markers, improved hypoalbuminemia, and decreased erythropoietin resistance (2). Additionally, Ayus et al. have reviewed 10.951 patients and reported that transplant nephrectomy improves survival after graft failure. After adjusting for socioeconomic status, comorbidities and donor characteristics, a 32% decrease in all-cause mortality has been found in transplant nephrectomy group compared to patients keeping the failed allograft (11).

Although transplant nephrectomy has been shown to improve survival and relieve symptoms after failed kidney transplant, it remains a technically demanding procedure that carries high morbidity (17-60%) and mortality (1.5-14%) due the poor health and comorbid conditions that often accompany transplant patients as well as operative complications (11-13). Alberts et al. have reviewed 157 transplant nephrectomies performed from 2000 to 2012, indicating 32 surgical complications (20%), with postoperative bleeding, hematoma formation, and infection being the most common causes. Surgical re-intervention was necessary in 10% of the cases. Other reported complications are colonic perforation, cardio-pulmonary complications, and sepsis (1,15).

The most commonly performed surgical technique for transplant nephrectomy is subcapsular extra peritoneal approach. Performing the procedure in a closed extraperitoneal space may result in fluid accumulation and subsequent infection. Immune-compromised patients are inevitably prone to develop septic complications in the presence of hematoma or seroma.

We hypothesize that creating an intraperitoneal window, after assuring hemostasis of the transplant pedicle, allows for passive drainage, decreases hematoma formation and minimizes the risk of infection, sepsis, and the need for re-interventions.

All transplant nephrectomies were performed using the standard subcapsular approach (Figure 1). We modified the standard double layer pedicle closure. Following excision of the specimen from the pedicle, any visible vessel was closed with figure of eight using #2-0 silk suture (Figure 2). This was followed with a double layer of running #2-0 prolene suture (Figure 3). In order to achieve adequate hemostasis, any capsular bleeding was controlled with electrocautery. Following this, the peritoneal window was created. The window was made large enough to avoid risk of internal hernia formation and bowel entrapment (Figure 4). Postoperative surgical complications were the primary outcome, and complications were graded using the Clavien-Dindo System (17). 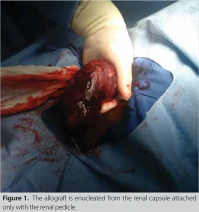 Figure 1. The allograft is enucleated from the renal capsule attached only with the renal pedicle.
× 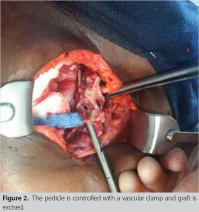 Figure 2. The pedicle is controlled with a vascular clamp and graft is excised.
× 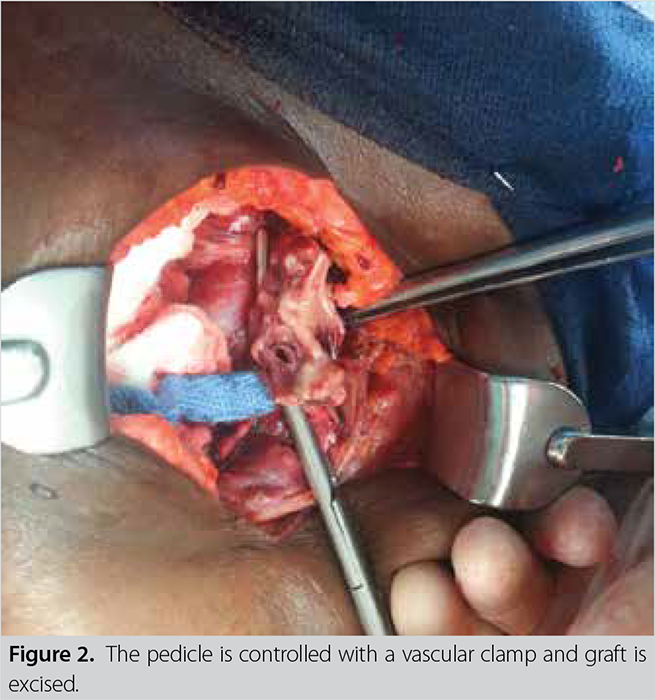 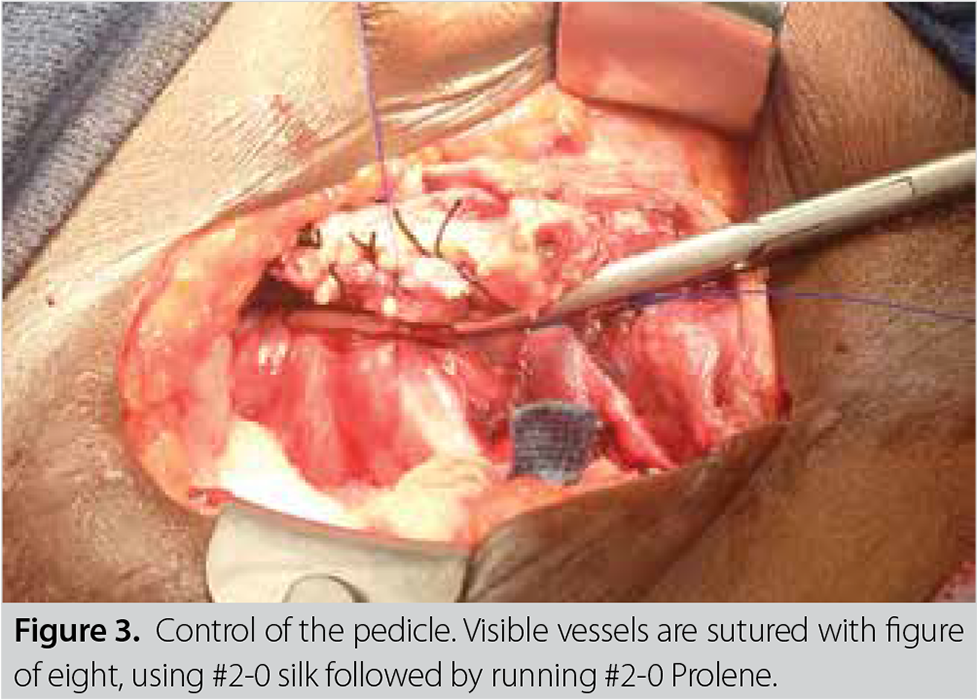 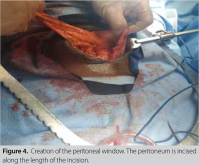 Figure 4. Creation of the peritoneal window. The peritoneum is incised along the length of the incision.
× 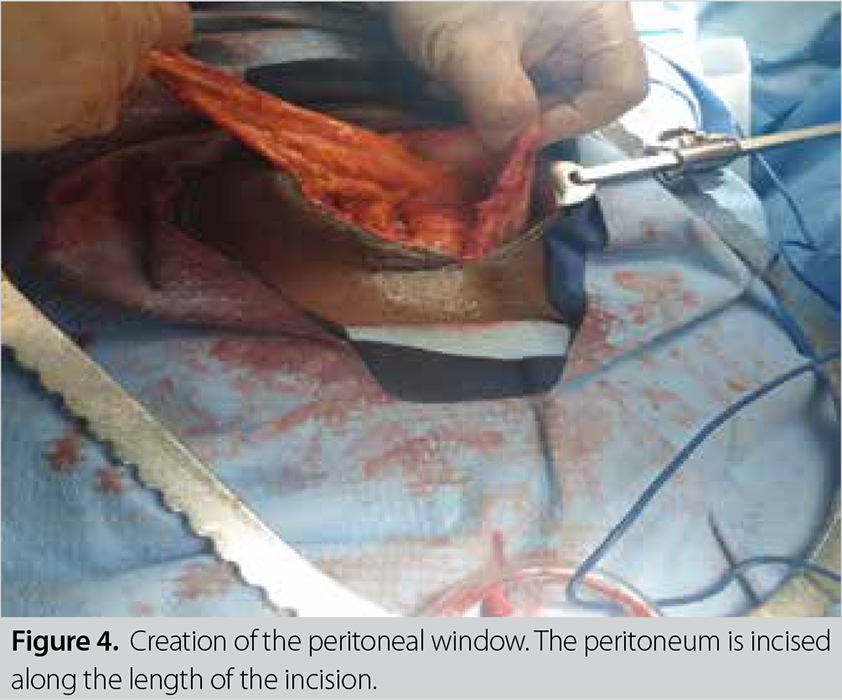 Intraperitoneal window formation during transplant nephrectomy is a novel surgical approach designed to reduce complications and decrease morbidity and mortality. We believe creating a passage for passive fluid drainage from the nephrectomy cavity into the peritoneal cavity decreases the rate of fluid collection as well as infection risk, which are the two most common complications that occur after transplant nephrectomy.

When compared to our 38 patients with intraperitoneal windows, all three studies had much higher rates of complications, hematoma formations and fluid collections, infections, as well as re-intervention rate and mortality.

Peritoneal window formation is an additional step in the surgical procedure that adds minimal amount of time to the total operation. In fact, the 38 nephrectomies with intraperitoneal window formation had a shorter average operative time (97.1 vs. 109.39 minutes), lower average estimated blood loss (172.5 vs. 509.2 mL), and shorter average hospital stay (3 vs. 7 days) than previously reported studies. Potential downsides of this technique could be bleeding into the peritoneal cavity, which is much harder to tamponade compared to the retroperitoneal space, therefore we advocate meticulous hemostasis. Other potential risk may be bowel obstruction; however, we advocate large opening of the peritoneum in order to minimize this risk.

Limitations of this study include small sample size, and inherent limitations of a retrospective analysis without control cohort.

In conclusion, intraperitoneal window formation is a novel surgical technique for transplant nephrectomy that adds minimal time to the operation and appears to have a much lower morbidity and mortality rate.

Prospective and controlled studies are necessary in order to obtain more reliable results; however, low levels of complications and zero mortality observed in this series compared to literature is suggestive of possibly superior outcome of this technique.

Due to the retrospective design of the study, the informed consent was not obtained.