Protoscolicidal effect of oleuropein: an in vitro study

Objective: Hydatid disease is a parasitic disease caused by Echinococcus granulosus and is still endemic in many parts of the world. Scolicidal solutions are generally used in any type of intervention, either surgical or percutaneous, to neutralize the cyst contents, although completeness of their effect is obscure and solid evidence is scarce. On the other hand, the use of these scolicidal solutions is not devoid of complications and many serious complications such as caustic sclerosing cholangitis may be seen in relation with their usage. Recent investigations proved protoscolicidal properties of olive leaf extract although the active ingredient has not been attributed to any component. The aim of this experimental study was to isolate oleuropein and test for in vitro protoscolicidal activity.
Material and Methods: Oleuropein, a phenolic compound found in olive leaves, is extracted and prepared in different concentrations. Echinococcal cyst containing livers of sheep are obtained from the government slaughterhouse. Cysts were punctured and live protoscolex suspensions were prepared under aseptic conditions. Different concentrations of oleuropein solutions were prepared and protoscolicidal property is analyzed and compared with positive and negative controls for different exposure times.
Results: Oleuropein 2% concentration was found to be protoscolicidal in all exposure times starting from 5 minutes.
Conclusion: 2% oleuropein is a powerful, natural protoscolicidal agent which should be evaluated clinically before its application in routine treatment practice.

Hydatid disease caused by Echinococcus granulosus continues to be a problem in many parts of the world including the Mediterranean Basin. In our country, sporadic cases still exist despite previous efforts to eradicate the disease (1). Surgery is the mainstay of treatment although PAIR (percutaneous aspiration injection and re-aspiration) under sonographic guidance is also available for some stages of the cysts (2,3). During the surgical or interventional treatment of the disease, aspiration of the contents and injecting scolicidal solutions into the cyst cavity to neutralize the parasitic elements are commonly used steps. Cetrimide, alcohol, and hypertonic NaCl solutions are the most preferred solutions to neutralize the parasite during these procedures. However, some has hazardous effects to the biliary epithelium and most are heavily concentration-dependent and does not have the chance to neutralize the contents in large or septated cysts. These unfavorable factors and lack of solid evidence about their effectiveness stimulate continuous and new efforts to find a novel scolicidal effective and yet devoid of complications if there is any. There are different substances used for this purpose and many synthetic and natural products have been investigated in terms of their scolicidal effect.

One of the natural substances is the olive leaf extract. Fresh olives and olive leaves have a bitter taste because of oleuropein, a phenolic compound (Figure 1). It is secoiridoid and its level in olives declines rapidly during maturation (4). Oleuropein has pharmacological effects including antioxidant, anti-inflammatory, anti-atherogenic, anti-cancer and antimicrobial activities (4). Reported antimicrobial and antiparasitic activities stimulate this experimental study, in which the scolicidal properties of oleuropein were evaluated. 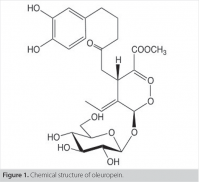 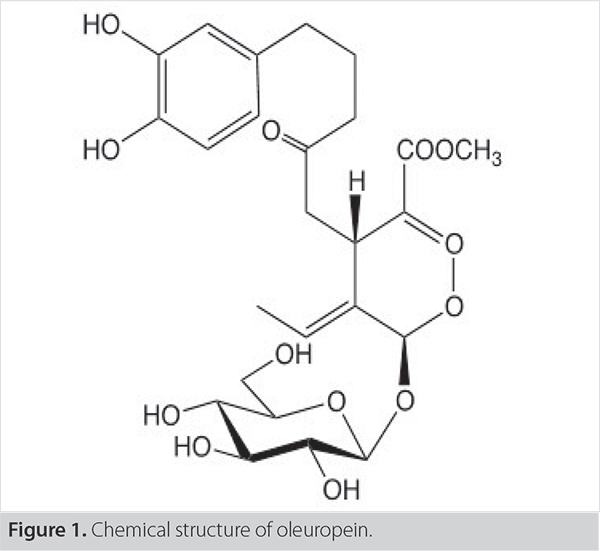 Extraction and isolation: The air dried and powdered leaves (200 g) were extracted with 80% EtOH (1000 mL) by shaking three days at room temperature and filtered. The filtrate was concentrated to 80 mL in vacuum at 50oC and washed with chloroform (80 mL 3) to remove lipophilic compounds. The remaining aqueous phase was applied to vacuum liquid chromatography (LiChroprep RP-18; 25-40 mm; column dimensions: 105 x 42 mm) employing H2O-MeOH mixtures with increasing amount of MeOH in H2O (0-100% MeOH). For each 100 mL of eluents, the MeOH ratio was increased by 5% MeOH. The fractions eluted with 45, 50 and 55% MeOH were rich in oleuropein (958 mg, 793 mg and 302 mg, respectively). 400 mg of crude oleuropein was further subjected to a Sephadex LH-20 column using a solvent system of MeOH-H2O (1:1) to yield pure oleuropein (208 mg).

Preparation of protoscolex suspension: Infested sheep livers containing hydatid cysts were collected from the governmental slaughterhouse and locally cleansed with povidone iodine solution in the laboratory. Cysts were punctured under aseptic conditions and hydatid fluid was aspirated and collected in a sterile container. The cysts were opened by a scissor and the hydatid sediment was aspirated by a pipette. Then the germinative membrane was extracted and rinsed with the cyst fluid in the container to free additional protoscoleces and hydatid sand. Cyst fluid was preferred for the short period storage of protoscoleces for mimicking the hydatid cysts conditions. The suspension was allowed to settle, and the protoscolex viability was confirmed under light microscopy. Living protoscoleces show characteristic mobility and do not take the dye (0.1% eosin) (2,3,6).

Study Design
Oleuropein solutions were prepared in 3 different concentrations of 0.1%, 1.0% and 2.0% for the study groups. Two mL of each solution was put in a test tube. 10% formalin, a known powerful protoscolicidal, was used as a positive control and hydatid fluid containing protoscoleces was the negative control group. Definition of the groups was as follows:

Time table: A drop of viable protoscolex-rich sediment was added to the oleuropein and positive control solutions with a pipette. Protoscoleces and brood capsules were allowed to settle down and specimens were taken after 5, 10, 15, 20 and 30 minutes from the sediment of the test tube.

Viability evaluation: All specimens were instantly placed on glass slides and a drop of 0.1% eosin was added and the slide was covered by a lamelle. Light microscopy was used instantly for the evaluation of protoscolex viability. The evaluation was performed under blinded conditions. If all protoscoleces are darkly stained and no characteristic movement was seen, it was defined as “Dead = inactive”. The result was noted as “Live = active” with the confirmation of at least one live (unstained and/or moving) protoscolex.

Group I (0.1% Oleuropein)
This concentration of oleuropein did show a very weak and slow protoscolicidal effect in our study. Peripheral scoleces in brood capsules were affected after 20 minutes of exposure, but central ones were apparently normal (Figure 2). All specimens contained viable protoscoleces on examination at the end of 30 minutes. 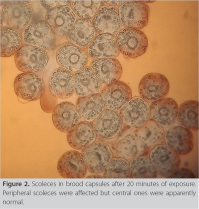 Figure 2. Scoleces in brood capsules after 20 minutes of exposure. Peripheral scoleces were affected but central ones were apparently normal.
× 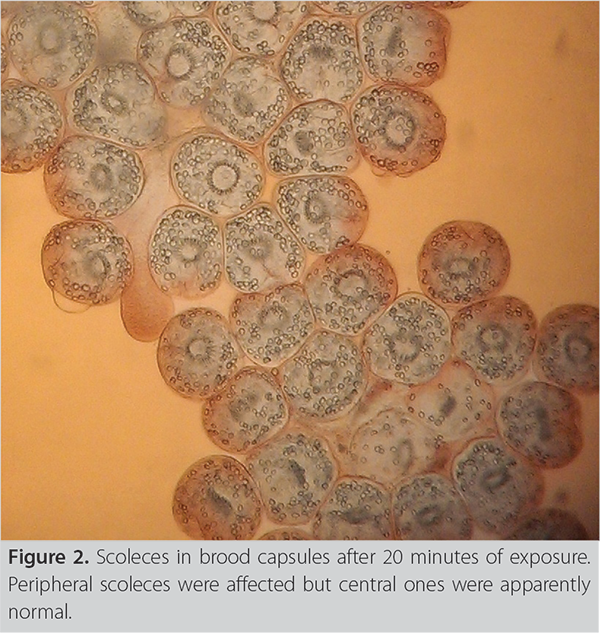 Group III (2% Oleuropein)
When the concentration of oleuropein was elevated to 2%, protoscolicidal effect was seen in all exposure times beginning from the 5th minute. The scoleces were darkly colored and the surroundings was tinted (Figure 3). 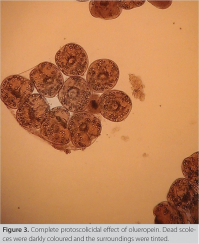 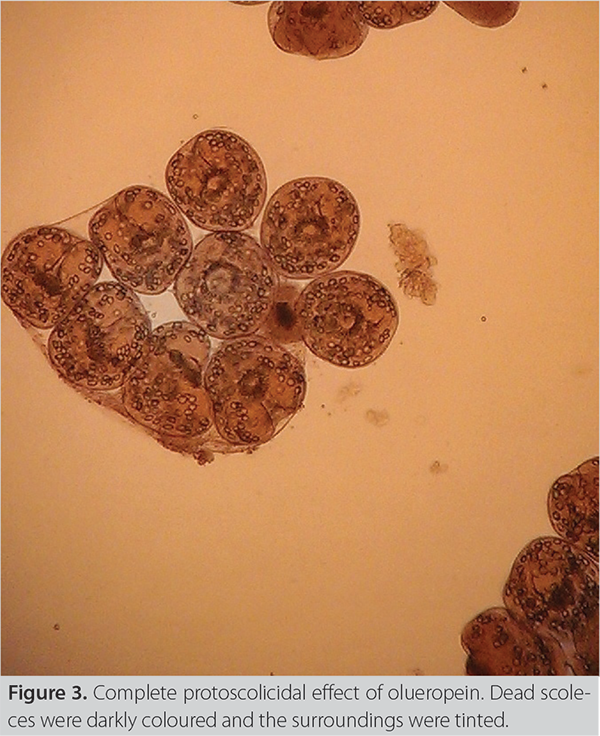 Group IV (10% Formalin)
All protoscoleces were dead in all exposure times starting from 5 minutes.

Group V (Hydatid fluid)
All protoscoleces were live in all exposure times till 30 minutes.

Results are summarized in Table 1.

Table 1. Different oleuropein concentrations and their protoscolicidal activity in exposure times up to 30 minutes

Although injecting a scolicidal solution is a widely-used practice during surgical or radiological intervention for the treatment of hydatid cyst, the objective evidence regarding the effect of this is controversial as there are studies confirming viable protoscoleces after proper usage of the most effective scolicidal agents, especially in the germinative membrane imprints (6). In addition, the usage of scolicidal agents may be related with serious side effects and complications, such as caustic sclerosing cholangitis, sclerosing peritonitis, metabolic acidosis and some other biochemical abnormalities may be seen (7-9). Despite these unfavorable factors, injecting a scolicidal solution is a must especially in PAIR and in a surgical intervention when the cyst cavity has to be intervened. To enter a cyst cavity that may harbor thousands if not millions of viable protoscoleces without sterilizing is a risk, as each one of these are capable to produce a new cyst in case of a leakage to the peritoneal cavity.

Olive tree (Olea europeana) is an endemic widespread small tree found mainly in Mediterranean countries as well as California, South America and parts of the Indian Ocean. Olive oil and olive fruit is an important component of Mediterranean diet, and products associated with olive tree are known to provide commercial products such as food, cosmetics and medicine. Oleuropein is the most prominent phenolic compound found both in the fruit and leaves of olives (4,10,11) and is the cause of characteristic bitterness of green olive fruits (12). Phenolic compounds are found in all parts of the olive plant and can reach concentrations of up to 140 mg/g on a dry matter basis in young olives and 60-90 mg/g of dry matter in the leaves (4). Oleuropein has pharmacological effects including antioxidant, anti-inflammatory, antiatherogenic, anticancer, antimicrobial and hypolipidemic activities.

Protoscolicidal effect of 0.1% olive leaf extract was confirmed in prior studies. This effect is seen in prolonged exposure and as the extract contains numerous chemicals this effect can be attributed to various substances (10,13). Primary medical constituents contained in unprocessed olive leaf are oleuropein, hydroxytyrosols and many other flavonoids (10). Oleuropein has been shown to have strong antimicrobial activity against gram-negative and positive bacteria. Antiviral activity against herpes mononucleosis, hepatitis virus, rotavirus, respiratory syncytial virus and parainfluenza type 3 virus is also attributed to oleuropein (4). In terms of antiparasitic effects, oleuropein has been found to show leishmanicidal activity as well as anti-toxoplasmic activity (14,15). To the best of our knowledge, this study is the first in which oleuropein is isolated and used as a single active ingredient in terms of protoscolicidal activity.

In this study, oleuropein showed a considerable protoscolicidal activity in a concentration dependent fashion, as 0.1% oleuropein was unsuccessful in terms of killing the protoscoleces in half an hour but when the concentration was increased to 2%, it acted as a powerful protoscolicidal in relatively shorter exposure times like 5 minutes. An ideal scolicidal agent should be effective in 5-10 minutes as it will be impractical to wait more after injecting a cyst during a surgical intervention. Waiting shorter periods puts the patient theoretically in a risk of secondary hydatidosis in case of a spillage if encountered during the surgery. With the isolated form of oleuropein instead of olive leaf extract, we chose shorter exposure times in contrast to a previous study (13). As stated before, these shorter exposure times are more convenient for surgical intervention, and if oleuropein was the agent responsible from protoscolicidal effect of olive leaf extract, using it as a pure substance may enhance its activity. Longer exposure times may be feasible not for the surgical setting but for PAIR (puncture-Aspiration-Injection-Re-aspiration).

Overall, oleuropein is a rewarding substance found in olive leaves that has protoscolicidal property. It should be thoroughly analyzed for the potential side effects and toxicity in further studies before administering it as the agent of choice.

2% oleuropein is a powerful, natural protoscolicidal agent which should be evaluated clinically before its application in routine treatment practice.