Measurement of all or part of the small bowel is a common and mandatory procedure in surgeries requiring small bowel resection or anastomosis. Depending on the procedure to be performed, the length of the bowel segments to anastomose is known at the beginning of the surgery, particularly in bariatric and metabolic surgeries (1-3). However, different surgeons employ different techniques to measure these lengths, and even if the same surgical technique is applied, the efficiency of the outcome may vary. A standard technique for measuring bowel length has not been established, which presents an obstacle to achieving the desired clinical outcomes and accurately assessing postoperative complications (4-9).

The small bowel is an elastic organ. The use of different techniques involving stretching or non-stretching of the bowel during measurement suggests that the target segment for a standard surgery will, unfortunately, differ in length from surgeon to surgeon. Although bowel lengths measured with and without stretching have been reported in the literature, to our knowledge, no studies have compared the two methods. Another important consideration is that if intraoperative bowel length measurement is repeated for any reason, contraction of the bowel smooth muscle may lead to erroneous results. In this study, small bowel length measurements obtained with and without stretching in healthy individuals undergoing living donor hepatectomy were prospectively recorded and compared. The aim was to compare the results obtained from these healthy individuals in order to facilitate the establishment of a standardized method of small bowel measurement.

Small bowel length measurements were performed in 24 healthy, prospectively enrolled and randomized liver donors at İnönü University Liver Transplant Institute. The study was approved by İnönü University Ethics Committee. Informed consent was obtained from all the individuals who participated in the study. Completely healthy liver donors > 18 years old who had no previous abdominal surgery were included into the study. Patients who had previous abdominal surgery were excluded from the study. The distance between the Treitz ligament and the ileocecal valve was measured using a 70 cm nylon tape. A sterile ruler was used to measure the final loops that were < 70 cm. All measurements were performed by the same surgeon immediately after laparotomy, before hepatectomy, or any other intra-abdominal manipulations. Twelve consecutive randomized patients were measured while fully stretching the small bowel, whereas the other 12 patients applied no tension when taking measurements. Measurements were performed at the midline between the mesenteric and antimesenteric borders and repeated three times using the same technique, resulting in three small bowel length measurements for each participant. The measurements were repeated in immediate succession. The measurement process lasted a total of approximately 10 min, and living donor hepatectomy proceeded uneventfully after measurements of all cases.

Table 1. Comparison of the stretched and non-stretched groups 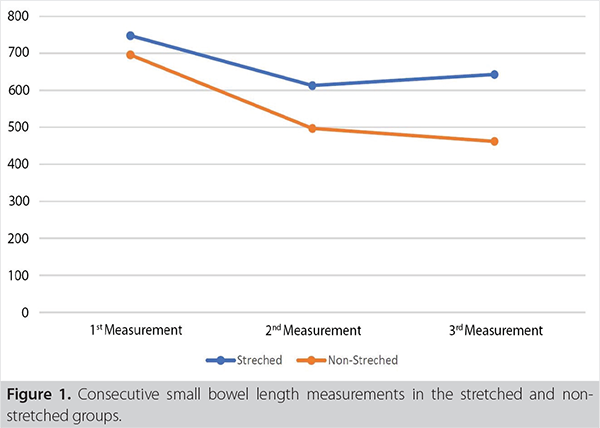 Measurement of the length of the human small bowel is not just an anatomic data point but is also important for avoiding short bowel syndrome or complications of metabolic and bariatric surgeries that may develop postoperatively. Many studies have criticized the fact that measurements cited in the literature are not obtained using a standard method. Nevertheless, there have been relatively few studies aimed at establishing standardization of measurement (8,10,11). The common feature of these studies is that they were all conducted within the last few years. The momentum gained by bariatric and metabolic surgeons has shifted research in this direction.

We believe that the lack of a gold standard procedure is the main reason for this. With current surgical techniques, the length of the bowel limbs must be revised due to complications or unsatisfactory outcomes. Therefore, surgeons are more concerned with how to measure the length of bowel segments than anatomists.

We obtained measurements from the midline between the mesenteric and antimesenteric borders in the present study. It has yet to be determined in the literature which contour is optimal for conducting measurements.

Another critical point that led to the present study is the question of whether or not to stretch the bowel during measurement. Stretching the elastic small bowel segments can result in longer length values measured in the same bowel. Underhill has evaluated small bowel length measurements before and after stretching in cadavers and determined that the small bowel length is increased by 4% in bodies refrigerated for 1 to 3 days (13). Considering that stretching alters small bowel length values even in the tissue that has lost most of its elasticity and tone, this can be expected to pose an even greater challenge in the living tissue. Some studies in the literature have not addressed the issue of tension at all (5,9,12,14).

A previous study has measured and compared small bowel length measured before and after stretching in the same live subjects and reported that stretching results in increases of 72 to 212 cm in the measured values (8). However, the authors of the previous study have overlooked the effect of repeated measurement on bowel length. In our earlier study of bowel length measurements, we demonstrated that repeated measurements yield different results, even when using the same technique (15). When a bowel segment is measured using any technique, contractions induced by manipulation change the length of the bowel prior to the subsequent serial measurement.

Therefore, repeating the measurements using different techniques, as in the study by Tacchino, compromises the validity of the length differences observed (8). The question we would like to answer is which technique will reduce the likelihood of making a surgical error when repeated measures of the bowel are required. Abellan et al. have examined the effect of the ratio of common limb length to total bowel length on clinical outcomes in patients with Roux-en-Y gastric bypass (16). They have measured the bowel length accurately and repeated the measurement twice each time to ensure greater reliability. In cases of discrepancy between the measurements, a third measurement has been performed. The length of the common limb has been calculated by subtracting the sum of the lengths of the biliopancreatic and alimenteric limbs from the total bowel length. However, repeated measurement performed in the present study in the name of caution was itself a source of inaccuracy. The effect of bowel contractions on measured bowel length was overlooked. Moreover, the length of the common limb was not measured directly but derived based on the total length of the other limbs. It should be recognized that the repeated small bowel length measurement process has been and will continue to be a reflection of the meticulous work of surgeons. Therefore, after each measurement of the stretched or non-stretched bowel in the present study, we repeated the measurement two more times. In order to achieve a repeatable, standardized method, we believed it would be beneficial to first evaluate the repeatability within subjects.

When Guzman et al. have stated that no surgeon would operate on a perfectly healthy person, they could not imagine a study where bowel length was measured in healthy subjects (17). One of the main points that make the present study valuable is that all measurements were taken from completely healthy liver donors. Furthermore, all measurements were performed by the same surgeon, thereby reducing subjective factors in the measurement technique.

In contrast to all other tissues, standardization of the technique is required for small bowel length measurement. We should keep in mind that just one touch to the small bowel will change all expected outcomes. According to our study, the stretching technique can reduce the error rate in repeated small bowel measurements.

Ethics committee approval was received for this study from the Ethics Committee of İnönü University School of Medicine.