Hydatid disease is a parasitic zoonosis caused by the larval form of the Echinococcus worm. Hepatic hydatidosis is the most common form of the disease in humans. Centrally located, large hydatid cysts have the tendency to rupture into the adjoining bile duct and form a fistulous communication. Suture closure of the cysto-biliary communication detected during surgery is recommended to avoid postoperative complications related to bile leak. In the era of minimally invasive surgery, laparoscopic management of the cysto-biliary communication can be challenging, and laparoscopic suturing may not always be feasible. Postoperative endoscopic biliary decompression is necessary in such situations, but it has its own set of potential risk and complications. This case report aimed at presenting a simple and easy technique for laparoscopic closure of the cysto-biliary communication when suture ligation is technically not possible.

Echinococcal hydatid disease is a parasitic zoonosis endemic in the Indian subcontinent. The liver is the most commonly affected organ (50%-70%), but other organs such as the lungs, spleen, and brain can also be involved (1,2). Cysto-biliary communication (CBC) is the most common complication of hepatic hydatid cyst, and its management may pose a challenge during minimally invasive surgery (3). Suture ligation of any detectable CBC is advised; however, it may not always be possible (4).

This study aimed at reporting three cases of hepatic hydatid cyst in whom CBC was detected intraoperatively, but laparoscopic suture ligation was not feasible. Laparoscopic clip application was performed to occlude CBC, thus avoiding the need for conversion (to open surgery) or any postoperative intervention.

A 62-year-old man presented with complaints of discomfort in the right hypochondrium for one month. There was no associated nausea, vomiting, jaundice, or weight loss. General examination of the patient was unremarkable. On abdominal examination, a globular, non-tender lump was palpable in the right hypochondrium. Blood investigations including liver function tests were normal. Abdominal computed tomography (CT) revealed a hydatid cyst size of 12 × 11 × 16 cm involving the left lobe of the liver extending up to the perihilar region (Figure 1).

Figure 1. Computed tomography scan of the abdomen showing a lar- ge hepatic hydatid cyst in close relation to the hilum.
× 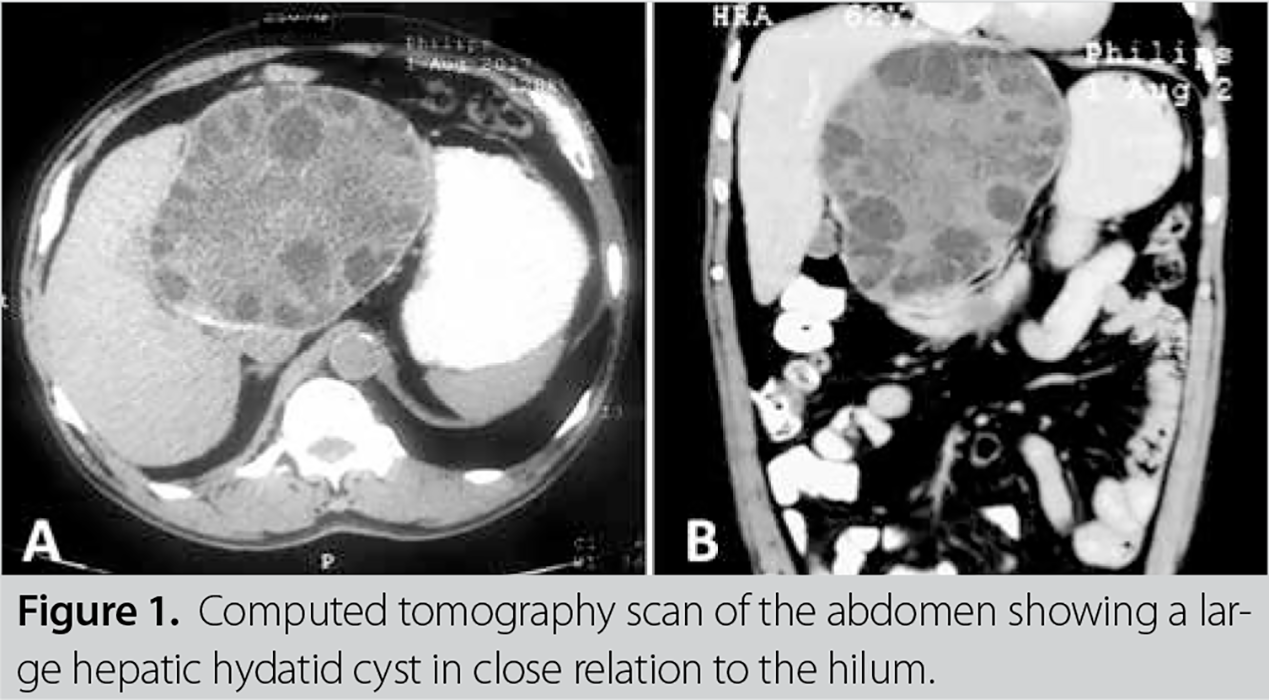 Laparoscopic hydatid cyst deroofing was performed, and daughter cysts and hydatid sand were evacuated. A small (5 mm) CBC with ongoing bile leak was discovered in the cyst cavity. Laparoscopic suturing of the CBC was attempted; however, it was unsuccessful due to the difficult fistula site. Metallic clips were applied to occlude CBC (Figure 2). Postoperative course was uneventful with no bile leak. The patient remained symptom-free at three months follow-up. 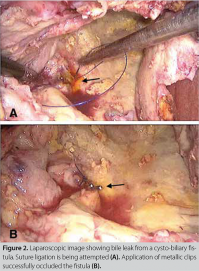 Figure 2. Laparoscopic image showing bile leak from a cysto-biliary fistula. Suture ligation is being attempted (A). Application of metallic clips successfully occluded the fistula (B).
× 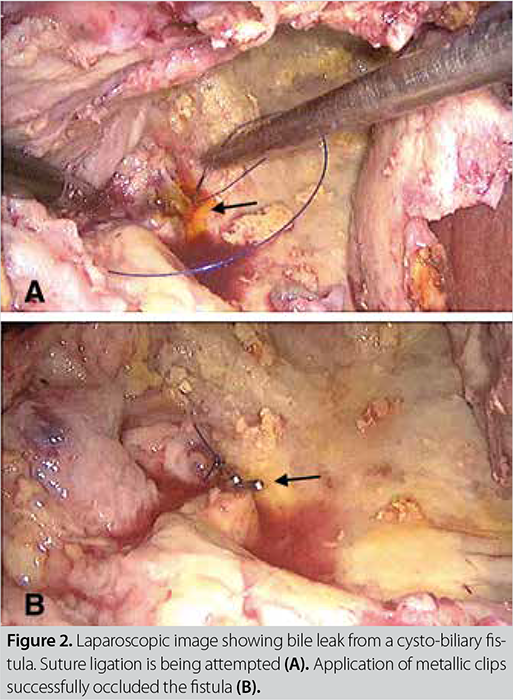 A 65-year-old woman presented with complaints of upper abdominal pain for two years with no other relevant history. General examination of the patient was unremarkable. On abdominal palpation, a tender hepatomegaly was found. Hemogram and bilirubin level were normal; however, serum alkaline phosphatase level (440 IU/L) was elevated. CT scan revealed two hydatid cysts in segments VI and VIII (sizes 7 × 6 × 6 cm and 4 × 4 × 6 cm, respectively) of the liver lying in close proximity to the right biliary system (Figure 3). Magnetic resonance cholangiopancreatogram showed a dilated common bile duct (14 mm) with intraluminal filling defects and a 9 mm focal defect in the posterior cyst wall, suggesting CBC (Figure 4). Endoscopic retrograde cholangiopancreatogram (ERCP) was planned for biliary decompression in view of a possible CBC, followed by laparoscopic hydatid cyst management. At ERCP, cholangiogram revealed few filling defects in CBC. On balloon sweep, few membranes were cleared from the CBC, and a 10 Fr plastic stent was placed in the right biliary system. Cyst contents were bile stained intraoperatively (Figure 5), and a CBC was present in the segment VI cyst. Laparoscopic suturing was not possible due to the limited intracavitary space. Finally, clips were applied laparoscopically, and the CBC was occluded. The patient recovered well and remained symptom-free six months post-surgery. An informed consent for publication was obtained from all three patients discussed in this study. 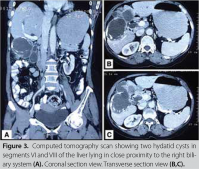 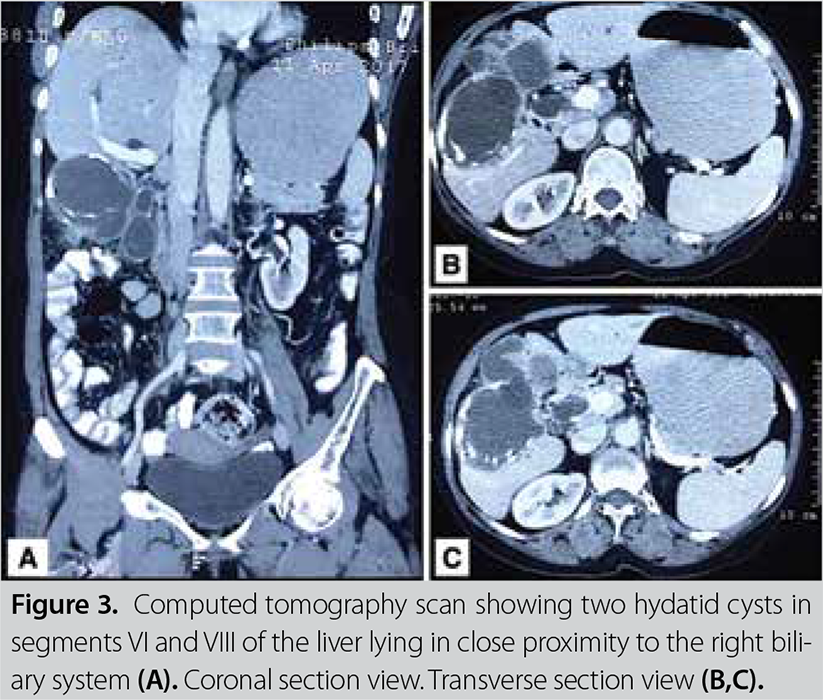 Figure 4. Magneticresonanceimageoftheabdomenshowinghydatid cyst in segment VI of the liver lying in close proximity to the bile duct (A). Magnetic resonance cholangiopancreatogram showing dilated biliary system with filling defects (daughter cysts) in the common bile duct (B).
× 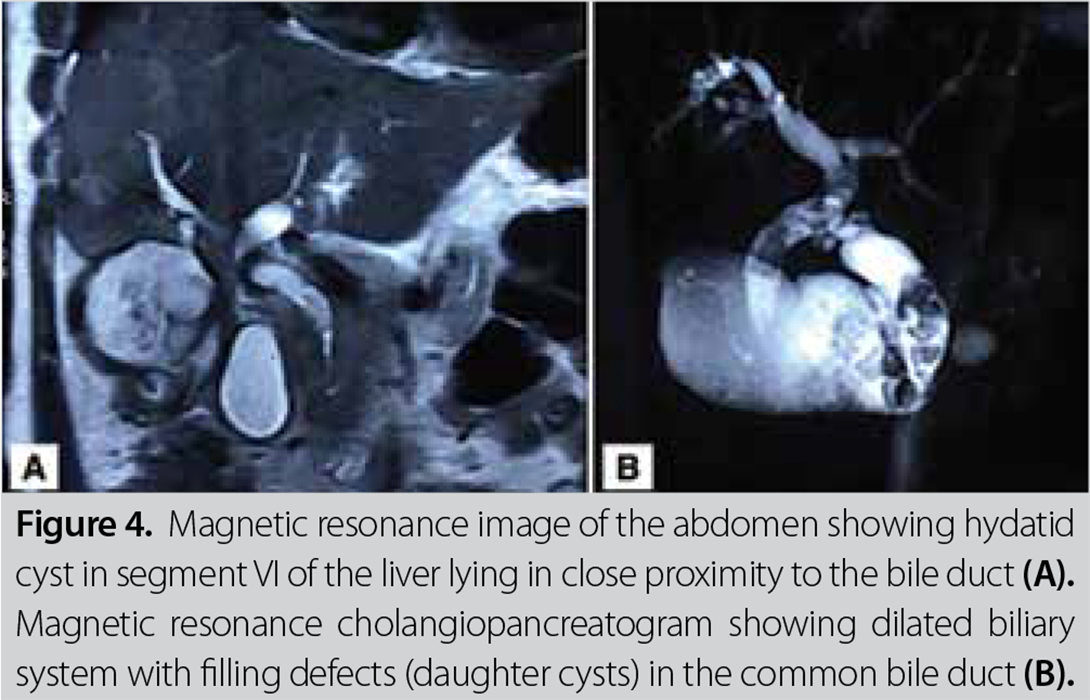 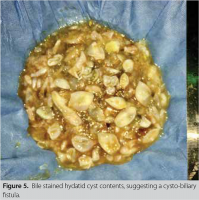 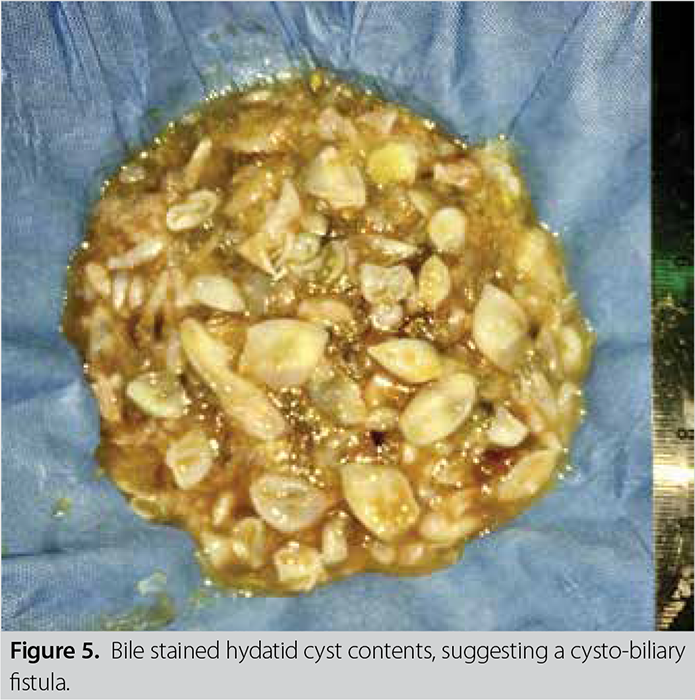 A 35-year-old woman was admitted for pain in the right hypochondrium and nausea for three months. General examination and her abdominal findings were normal except for a small paraumbilical hernia. Blood investigations (including liver function tests) were within normal limits. Abdominal CT demonstrated a hydatid cyst size of 9.5 × 7.4 × 7 cm in relation to segment VI of the liver. Laparoscopic hydatid cyst surgery and paraumbilical hernia repair were performed in a single setting. A small (5 mm) CBC was noted along the medial Wall of the cyst cavity intraoperatively. Laparoscopic suturing of the CBC was attempted but could not be performed due to the difficult location of the CBC. Laparoscopic endoclipping of the CBC was performed with metallic clips. She had an uneventful postoperative course and remained symptom-free at eight months follow-up.

CBC site was clearly delineated after deroofing and evacuation of the cyst contents. The fistula site was grasped with a tip of a Maryland dissector and lifted slightly. Two metal clips (Ligaclip Extra, Ethicon Endo-surgery, LLC, Guaynabo, Puerto Rico, USA) were then applied over the fistula site. Cessation of the bile leak indicated successful occlusion of the fistula (Supplementary video file 1). A surgical vacuum drain was placed in all three cases.

Hepatic hydatid disease is a significant problem in endemic areas including India (1-3). The cyst gradually enlarges and compresses the surrounding hepatocytes and biliary radicles. Long standing bile duct compression by the hydatid cyst may result in intrabiliary cyst rupture, leading to the formation of CBC (5). CBC incidence has been reported in up to 25%-30% of cases (1-3). Diagnosis of CBC is usually made preoperatively, but sometimes, it can get unmasked during surgery. Occult CBC remains undetected even during surgery and is manifested in the postoperative period as biloma or external biliary fistula (6). Postoperative management of such leaks is challenging and may require invasive procedures, such as endoscopic biliary stenting and percutaneous drain placement. A major laparotomy may rarely become necessary. Thus, intraoperative detection and management of CBC are crucial.

All CBCs detected intraoperatively should be meticulously addressed. With the advent of minimally invasive approaches, laparoscopic hydatid cyst deroofing is increasingly performed offering several advantages (10). However, management of concomitant CBC can sometimes be challenging with this approach. Difficult fistula site, limited intracavitary space, and surgeon’s inexperience may occasionally render laparoscopic CBC suturing unachievable. In all three of our cases, laparoscopic suture ligation was not possible due to the difficult location and limited access. Metal clips were applied, and bile leak stopped instantaneously, thus avoiding any postoperative morbidity and need of postoperative ERCP. Clip slippage is a potential drawback; however, no such complication was encountered in the present case series.

Laparoscopic suturing of CBC encountered during hydatid cyst surgery may be technically challenging. Laparoscopic clipping can successfully occlude CBC in difficult cases. It is a cheap, reproducible and effective technique of CBC management.