Surgery is the only treatment method in pancreatic cancer. Unfortunately, metastatic diseases or invasion of the main vascular structures are observed in a majority of cases at the time of diagnosis; these structures originate from the body, neck, and tail of the pancreas and are considered inoperable. The first celiac artery resection for the treatment of cancer was described by Appleby in 1953. Here, we describe our hepatic artery reconstruction technique in a case with pancreatic body cancer. A 37-year-old male patient was admitted to our emergency department due to syncope. The patient was diagnosed with acute renal failure secondary to fluid loss. Thereafter, his general condition was stable and laboratory results improved. Abdominal computed tomography was performed. Pancreatic cancer originating from the pancreatic body was detected. A pancreatic biopsy was performed and neoadjuvant gemcitabine and paclitaxel chemoradiotherapy were initiated. Surgical treatment was recommended for the identification of regression after neoadjuvant chemoradiotherapy. Following intraoperative Doppler ultrasonography, en bloc distal pancreatectomy and splenectomy involving the celiac artery trunk and total gastrectomy were performed. However, surgical margin reliability in frozen section revealed that the tumor was still present. Therefore, the surgical procedure was replaced with total pancreaticoduodenectomy. Hepatic artery reconstruction was performed from the left main iliac artery using a 4-mm ringed GORE-TEX® graft. The iliac-hepatic bypass for hepatic artery reconstruction in pancreatic cancer could be an alternative surgical technique.

Surgery is the only treatment method known to prolong survival in pancreatic cancer, which is one of the most lethal types of cancer. In the standard treatment of cancer originating from the body of the pancreas, splenectomy and distal pancreatectomy are involved; however, resection of the main vascular structures, such as the celiac artery and main hepatic artery, is required to achieve a curative resection (R0) in most cases (1). Unfortunately, there are limited data available on celiac artery resection in the cancer of the pancreatic body. This study aimed to describe our novel hepatic artery reconstruction technique after switching from the Appleby procedure to total pancreaticoduodenectomy in a patient with pancreatic body cancer since intraoperative frozen section revealed that the tumor had remained at the surgical margin.

A 37-year-old male patient was admitted to the emergency department due to syncope. The patient had lost about 30 kg of weight with increasingly severe abdominal pain in the 3 months before admission. Laboratory tests revealed elevated aspartate aminotransferase (100 U/L), alanine aminotransferase (80 U/L), and creatinine (2.7 mg/dL); an international normalized ratio of 1.8; and CA19-9 of 200 U/mL. In a focused assessment using sonography for trauma of the abdomen, no free fluids were detected; however, an approximately 6-cm mass of pancreatic origin was observed in the upper abdomen. The patient was admitted to the intensive care unit due to acute renal failure secondary to fluid loss. His general condition was stable and laboratory results improved. In a dynamic upper abdominal computed tomography scan, pancreatic cancer that showed no distant organ or peritoneal spread was detected in the splenic, hepatic, and celiac artery originating from the pancreatic body (Figure 1). Additional focus was detected in a positron emission tomography scan. A pancreatic biopsy was performed under the guidance of ultrasonography (USG), and neoadjuvant gemcitabine and paclitaxel chemoradiotherapy were initiated. Surgical treatment was recommended upon the identification of regression after neoadjuvant chemoradiotherapy. 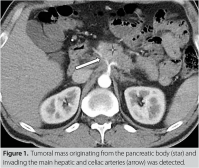 Figure 1. Tumoral mass originating from the pancreatic body (star) and invading the main hepatic and celiac arteries (arrow) was detected.
× 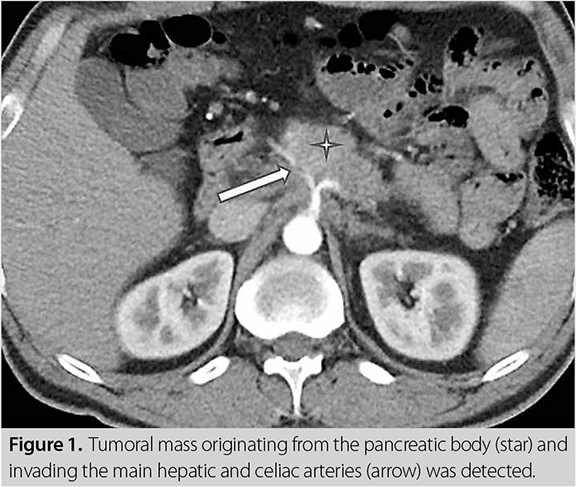 A written informed consent was obtained from the patient. No distant organ metastasis was noted in abdominal exploration. The mesenteric artery and vein were suspended through an extended Kocher maneuver. The hepatoduodenal ligament was dissected and the main hepatic artery, portal vein, and bile duct were suspended. The pancreas was transected from the retropancreatic portal vein level. The main hepatic artery was clamped, and the peak systolic velocity of the hepatic artery was measured as normal (58.60 mL/min) using intraoperative Doppler USG. Following intraoperative Doppler USG and macroscopically adequate hepatic artery pulsation, en bloc distal pancreatectomy and splenectomy, including the celiac artery trunk, and total gastrectomy, were performed. The examination of the specimen sent for surgical margin reliability revealed that the tumor was still present; therefore, we decided to perform pancreaticoduodenectomy. Conventional pancreaticoduodenectomy was completed with gastroduodenal artery connection following a choledochal dissection. Due to the presence of acute renal failure in the patient’s history, hepatic artery reconstruction was performed from the left main iliac artery with the help of a 4-mm ringed GORE-TEX® (W. L. Gore & Associates, Flagstaff, Arizona, USA) graft to minimize the risk of renal ischemia due to aortic clamping. Total duration of the ischemia was 25 min. Hepatic artery flow was 60 mL/min in the repeated Doppler USG (Figure 2). Reconstruction was completed with hepaticojejunostomy and esophagojejunostomy. In the post-operative period, blood sugar level of the patient was regulated, and he was discharged on Day 15 following the operation (Figure 3). In post-operative histopathological examination, all surgical margins were found to be negative for tumors. Adjuvant therapy was completed, and the patient is cancer-free and still alive at 22 months after the operation. 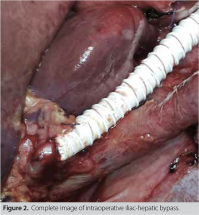 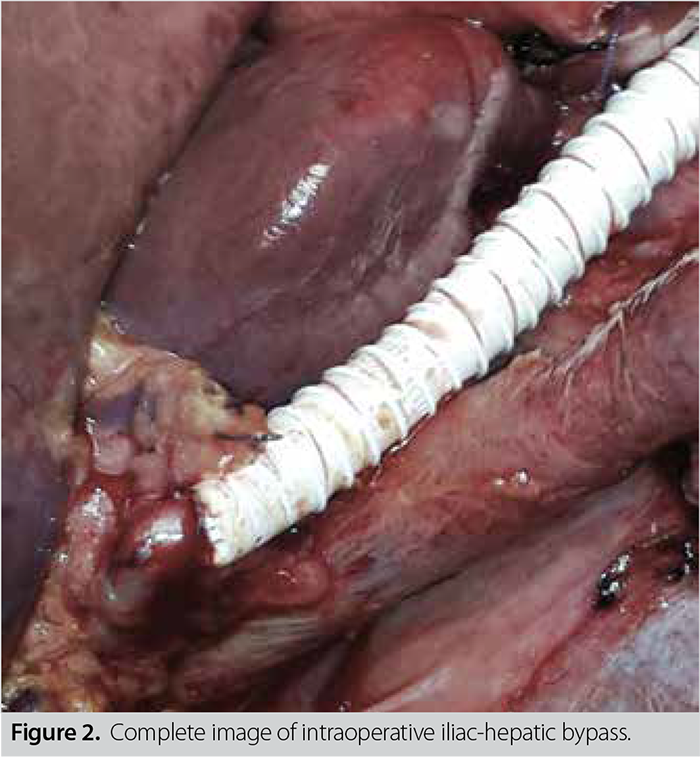 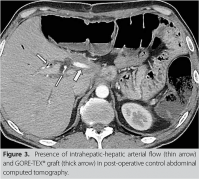 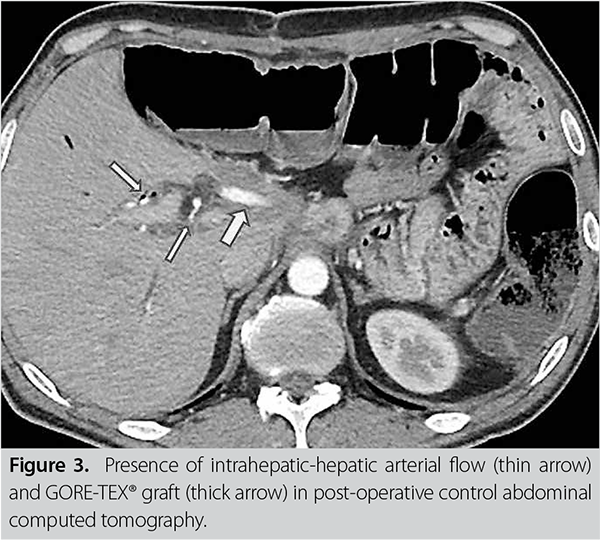 Despite the developments in surgical, adjuvant, and neoadjuvant radio-chemotherapy regimens for the treatment of pancreatic cancer, five-year survival rates are still below the desired targets. In the study by Sohn et al., only 10%-30% of pancreatic cancer patients have been reported to be eligible for the surgical treatment (2). Despite a theoretically possible curative (R0) resection due to the resection of major vascular structures and complex reconstructive surgical interventions in locally advanced diseases, severe post-operative morbidity and mortality rates are observed. Therefore, the involvement of adjacent vascular structures in pancreatic cancer is still considered inoperable by most surgeons. In recent years, publications from high-volume centers have become the basis for new discussions on the applicability of superior mesenteric and portal venous resections with acceptable complication rates (3). Although the resection of venous structures in pancreatic cancer and their impact on survival has gained acceptance, the resection of arterial structures remains the center of discussion. However, there are no studies in the literature supporting the non-resection of the arterial structures in actuality. About 30% of pancreatic cancers are located in the pancreatic body or tail, and cancer in the pancreatic body leads to early celiac and main hepatic artery invasion due to anatomic proximity (4). According to the current guidelines, in cancer cases located in the body and tail of the pancreas, the involvement of the celiac and main hepatic arteries is considered a criterion for non-resectability. However, splenic artery involvement is not included in the inoperability criteria (5).

In our case, pancreatic cancer originating from the pancreatic body characterized by main hepatic and celiac artery invasion was detected. Upon showing response to preoperative neoadjuvant treatment, surgical treatment was recommended to ensure maximum survival time. Main hepatic artery clamping was performed before celiac artery resection. Meanwhile, as intraoperative Doppler USG scan revealed adequate hepatic artery flow, celiac artery resection and total gastrectomy were added to distal splenopancreatectomy. Due to the invasion of the posterior wall of the stomach by the mass in the pancreas, we decided that removal with total gastrectomy rather than preservation of left gastric artery by reconstruction would be more suitable for reaching the goal of R0 resection. Preoperative celiac artery embolization was not performed oin our patient, as at centers where intraoperative USG and vascular reconstruction can be performed frequently, possible complications arising from embolization can be avoided. Total pancreaticoduodenectomy was recommended based on the finding that the tumor remained in the surgical margin according to the intraoperative frozen section examination. We decided to perform iliac-hepatic bypass for hepatic artery reconstruction via ligation of the gastroduodenal artery as other reconstruction methods required total aortic clamping to achieve adequate artery flow rate. This method was preferred in our case with a history of acute renal failure owing to its ease of application and to avoid additional morbidity. Our patient completed the postoperative adjuvant therapy. He remains cancer-free and is in his 22ndpost-operative month.