Breast cancer is the most frequently seen cancer in females but primary neuroendocrine carcinoma of the breast, which was defined as a separate entity in the 2003 World Health Organisation tumour classification, is seen extremely rarely. This entity, which is still not well-defined and has not been well-researched, demonstrates a more aggressive course than invasive ductal carcinoma. As metastatic breast neuroendocrine tumours are more widespread and the treatment strategy is different, preoperative differential diagnosis is important. The basic diagnostic method is pathological examination. If a neuroendocrine pattern is determined in microscopy, then immunohistochemical study of neuroendocrine markers should be made. It is necessary to be vigilant in terms of synchronous tumours and metachronous tumours which may develop in the postoperative period as the incidence of synchronous and metachronous cancers in patients with neuroendocrine tumours is higher compared to the general population. The case presented here is of a 73-year old patient who presented with complaints of a breast lump, which was thought to be invasive breast cancer, and as a result of the operation with pathological and immunohistochemical examination, primary neuroendocrine carcinoma of the breast was determined. With more advanced evaluations, no synchronous or metachronous tumours were determined.

Neuroendocrine cancers of the breast refer to a heterogenous group of tumours which comprise less than 1% of all breast tumours (1). They show similar morphological features to neuroendocrine neoplasmas of the intestine and lungs. For diagnosis of a neuroendocrine tumour, at least 50% of the tumour cell must express one or more of the neuroendocrine markers (neuron specific enolase, chromogranin, synaptophysin) (2,3). These tumours, which are more often seen in elderly patients, have a high tendency to local and distant recurrence and show an aggressive course with low general survival rates (2,4). Synchronous tumours are an almost inseparable part of neuroendocrine breast tumours (5). The treatment for a primary neuroendocrine tumour of the breast is firstly surgery then, depending on the status, hormonotherapy, chemotherapy or radiotherapy can be added (6).

A 73-year old female presented at the clinic with complaints of pain and swelling, redness of the skin and bruising in the right breast. The patient had noticed the swelling in the breast one month previously, and the redness and brusing of the skin had occurred in the last week. The patient was the mother of two children, each of whom she had breast-fed for approximately one year. She had never used any oral contraceptive agent or hormone replacement therapy. She had passed through menopause 30 years previously. On physical examination, a hard immobile mass, 4 x 2 cm in size, was palpated in the right breast 2 cm from the areola at 11 o’clock. There was an area of redness and ecchymosis of pink-purple colour on the skin of the breast over the mass. In the right axillary region, lymphadenopathy was palpated. Tumour markers were negative.

On ultrasonography (USG) of the right breast, malignant lymph nodes were determined in the right axilla and a mass lesion, 31 x 23 mm in size, located 2 cm from the areola at 11 o’clock, in a hypoechoic pattern with no evident vascularity on the colour Doppler USG examination, with irregular borders which could not be clearly differentiated from the pectoral muscle with no posterior acoustic shadow observed. On mammography, a macrolobular mass lesion was observed 3 x 2 cm in size in the superior-external quadrant of the right breast (Figure 1). 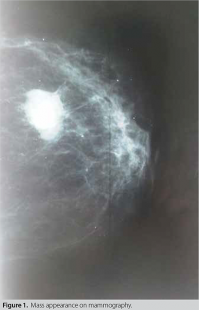 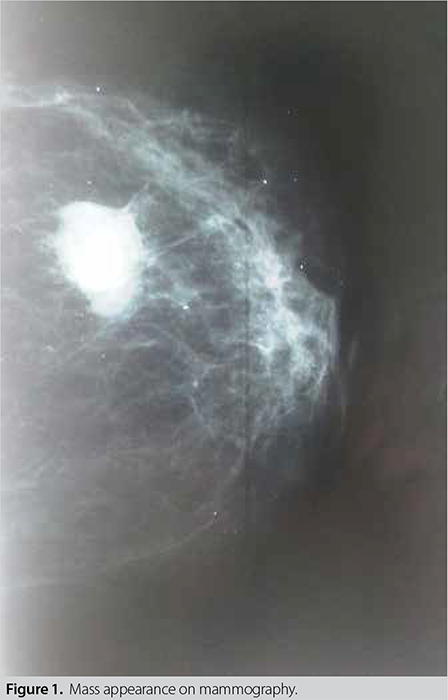 Tru-cut biopsy was applied to the mass lesion under USG guidance. In histopathological examination, a tumour was observed showing infiltration in the form of large solid islands in the fibrous stroma. In the centre of these solid islands, scattered rosette-like structures were seen and occasionally cells which resembled signet rings. In immunohistochemical staining with GCDFP15, CK7 and NSE, there was cytoplasmic positive reactivity in a section of the neoplastic cells, 95% estrogen receptor (ER) positive reactivity, 85% progesterone receptor (PR) positive reactivity and CK20 and C-erb b2 negative reactivity. In p53 staining, myoepithelial layer was not observed. With these findings, invasive ductal carcinoma displaying neuroendocrine characteristics, was reported as histological Grade 1. No other primary tumours were determined outside the breast from the cranial, neck, thoracic and abdominal computed tomography (CT) examination and gastrointestinal endoscopy, so a modified radical mastectomy (MRM) was applied to the patient. Pathology examination results of the biopsy material were histological Grade 3 according to the World Health Organisation 2010 classification. Tubule formation was graded as 3, nuclear pleomorphism as 2 and mitosis as 3 (under 12/10 magnification). The invasive tumour was 4 cm in diameter (pT2).

In the examination of the axillary dissection material, 14 reactive lymph nodes were determined (pN0). In the immunohistochemical examination with neuron specific enolase (NSE), cytoplasmic positive reactivity was determined in most of the cells. The Ki 67 proliferation index was below 5%. With these findings, the patient was evaluated with stage 2A (pT2N0M0) of luminal A type invasive ductal carcinoma showing neuroendocrine differentiation (Figure 2 and 3). As no synchronous tumour was determined, it was accepted as a primary solid neuroendocrine carcinoma of the breast. Anastrozol, (1 mg/day Arimidex) as an aromatase inhibitor, was started and with no recommendation for adjuvant chemotherapy or radiotherapy, the patient was followed up for four years with no problems. 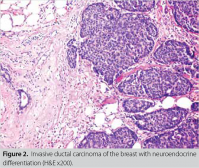 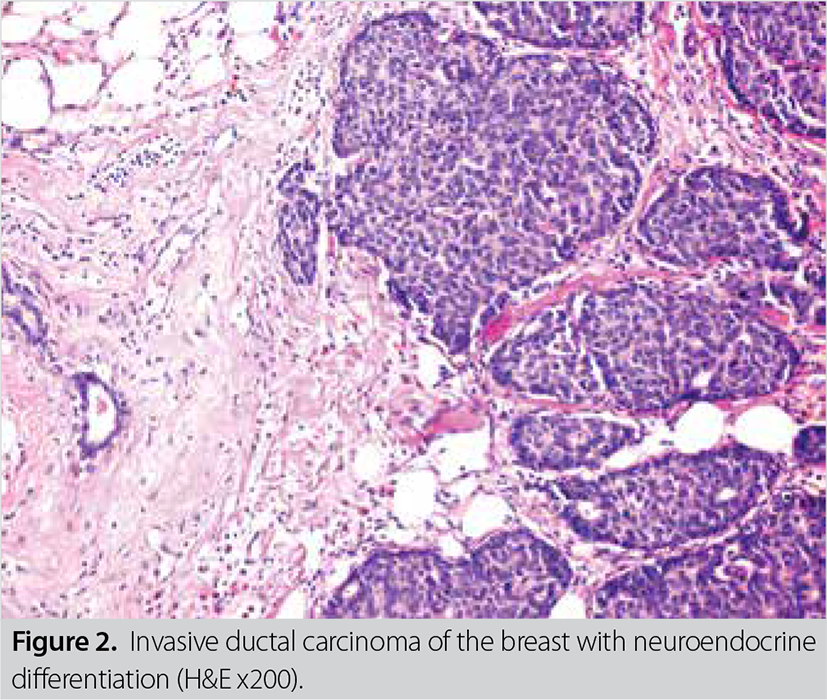 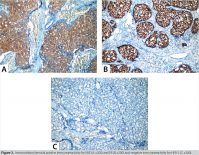 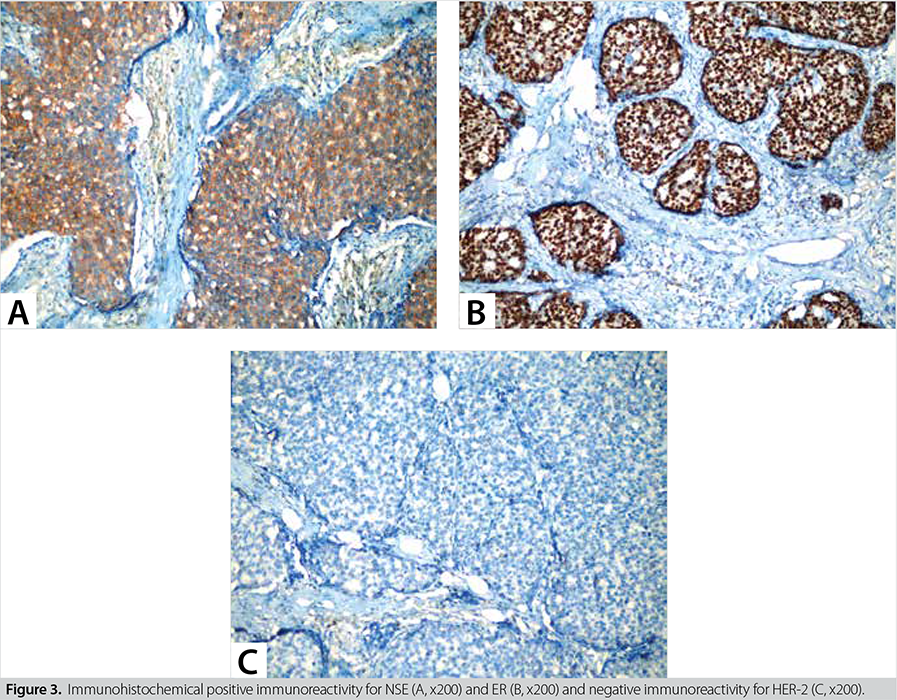 Histogenesis of the tumour has not been fully clarified as yet. Very few researchers have hypothesised that rather than the carcinoma originating from endocrine cells which are present in the breast, it shows endocrine differentiation of the breast. The majority; however, consider that they have originated from the differentiation of the neuroendocrine carcinoma phenotype of the multipotent stem cells (8).

Compared with the general population, there is a high incidence of synchronous and metachronous cancers in patients with neuroendocrine tumours (14). In a study by Lopez-Bonet et al. (5), a second tumour has been found in 5 of 12 cases. In the case presented here, no secondary tumour was determined and it was accepted as a primary neuroendocrine carcinoma of the breast.

In the literature, the majority of these cases are 60-70 years of age. There is no specific clinical or radiological characteristic different from other breast malignancies (11). According to Samli et al. (15), the complaints related to this disease are breast cellulitis, mastitis, abscess and inflammation of the breast. Tumours are not seen bilaterally and are more often located in the left breast. In the case presented here, the patient was 73 years of age and had complaints of redness and bruising on the skin of the breast. The tumour was determined as a hard, immobile mass in the right breast.

Neuroendocrine carcinoma displays a more aggressive course than invasive ductal carcinoma (4,8). Five-year local and distant recurrence rates have been found to be 15% and 34%, respectively (4). Mucinous differentiation and ER/PR positivity are good prognostic factors (8). The most common sites of metastasis are the bones and liver (4).

The surgical treatment for primary neuroendocrine cancer of the breast ranges from lumpectomy to MRM (6). In cases of large, multifocal or retro-areolar tumours, MRM is preferred (4). If there is ≥ 10% expression of Ki67 protein, which is used to define the aggressiveness and proliferation activity of the tumour, then adjuvant chemotherapy may be given. Hormonotherapy with tamoxifen or aromatase inhibitors is applied to patients with ER and/or PR positivity. Radiotherapy is used for patients who undergoing breast-conserving surgery and/or patients who have 3 or more axillary lymph node metastases (5). In the current case, MRM was applied as a surgical procedure. Ki67 expression was below 10% and oestrogen and progesterone receptors were positive. Therefore, as the patient was postmenopausal, aromatase inhibitor was administered without adjuvant chemotherapy.

When a diagnosis is made of a primary neuroendocrine cancer of the breast, it is necessary to make an evaluation in respect of synchronous and metachronous tumours to be able to adapt the prognosis and treatment strategy for the patient.

This study was presented at the 19th National Congress of Surgery, 16-20 April 2014, Antalya, Turkey.