Objective: Extralevator abdominoperineal excision (ELAPE) reduces the risk of positive circumferential resection margin (CRM) and of intraoperative perforation (IOP), both of which are associated with high local recurrence rates and poor survival outcomes for rectal cancer. The aim of this study was to compare the results of ELAPE with conventional abdominoperineal excision (APE) for low rectal cancer.
Material and Methods: A total of 25 consecutive patients underwent ELAPE for low rectal cancer between November 2008 and September 2011. Fifty-six patients treated by conventional APE prior to 2008 were selected from our rectal cancer database for comparison as a historical cohort.
Results: The mean follow-up was 44.7 months in the ELAPE group, and 70.6 months in the APE group. Patients undergoing ELAPE had a lower CRM positivity and IOP rate than APE (12% vs. 20%, p=0,531; 4% vs. 8,9%, p=0,826; respectively). The ELAPE group was associated with higher perineal wound complications than the APE group (16.0% vs. 1.8%, p=0.030). Local recurrence rates for patients in both groups did not differ significantly (4.0% vs. 3.6%, p=1.0).
Conclusion: The results of this study suggest that ELAPE technique was associated with less CRM involvement and reduced rates of IOP but markedly higher rates of postoperative perineal complications occurred as compared to conventional surgery. ELAPE must be reserved for advanced low rectal cancers.

As originally described by Miles (1), abdominoperineal excision (APE) has long been the standard treatment for tumors of the middle and lower rectum. It achieves the greatest possible distal margin of resection by removing the anus in continuity with the rectum. Total mesorectal excision (TME), recommended by Heald et al. (2), has led to a decrease in perineal amputation numbers and has become the oncologic standard in the last 30 years. However, the rates of circumferential resection margin (CRM) positivity and of intraoperative perforation (IOP) is higher in abdominoperineal excision as compared to anterior excision. Recently, Holm’s studies have generated a renewed interest on the abdominoperineal excision technique (3). In this operation, the levator muscles are excised from their origins on the pelvic side walls and removed en bloc with the tumor. The aim of this approach is to reduce both the rate of CRM positivity and IOP, which are associated with high rates of local recurrence and poor survival outcomes in patients with rectal cancer (4-8). Although there are many similarities between what Miles has previously described and what Holm recently defined, there are major differences that should be recognized e.g. Miles did not use the prone position and did not undertake a total mesorectal excision. This study was designed to compare the results of extralevator abdominoperineal excision (ELAPE) with the conventional APE approach.

Patients
Between November 2008 and December 2011, 25 patients with low rectal cancer underwent ELAPE in the prone jack-knife position. Nine patients (36.0%) received neoadjuvant long-term chemoradiotherapy. A consecutive series of 56 patients that were treated by conventional APE in the lithotomy position between 2003 and 2008 were selected from our prospectively collected rectal cancer database for comparison as a historical cohort. Eight of these patients (14.3%) had received neoadjuvant chemoradiotherapy. Chemoradiation indication was defined as T3-4/N+ tumors for both group of patients. Surgeries were performed at 6 to 8 weeks after neoadjuvant therapy. Low rectal cancer was defined as tumors in the lower third of the rectum. Digital rectal examination, plain chest x-ray, colonoscopy, abdominal ultrasonography, and computerized tomography were used for staging both before and after chemoradiotherapy. All operations were performed by the same consultant surgeon who had undergone additional training on the extralevator technique. All patients were followed up prospectively. Patient informed consent was obtained for the operation presented in the study. Our study has been conducted according to World Medical Association (WMA) Declaration of Helsinki Ethical Principals for Medical Research.

Patient and tumor characteristics are summarized in Table 1 categorized as early and late results. The mean follow-up was 44.7 months in the ELAPE group and 69.8 months in the standard group. There were no significant differences between the two groups in terms of sex, tumor stage and grade, mean age, BMI and follow-up duration. Patients undergoing ELAPE had a lower incidence of CRM involvement and reduced IOP rates compared to those that underwent APE (12% vs. 20%, p=0.531; 4.0% vs. 8.9%, p=0.826). Local recurrence rates in both groups did not differ significantly (4.0% vs. 3.6%, p=1.0).

The ELAPE surgery was associated with an increase in perineal wound complications as compared with the standard approach (16.0% vs. 1.8%, p=0.03). Most of the perineal morbidities were infections and suture breakdowns. Preoperative radiotherapy was used more frequently (36.0% vs. 14.3%, p=0.012), and the operation times were substantially longer for the ELAPE approach than APE (301.5±45.5 minutes vs. 213.7±63.3 minutes, p<0.001). There was no in-hospital mortality in either group.

In the group of 25 patients who underwent ELAPE for low rectal cancer, both CRM positivity and IOP rates were lower than patients who underwent APE, although neither result was statistically significant. This trend could be explained by the fact that the levator muscles are excised from their origin on the pelvic side walls, which creates a cylindrically shaped specimen (Figure 1). Therefore, a surgical waist no longer exists on the specimen at the level of the tumor in contrast to the APE technique (Figure 2). A comparison of this technique with APE was published recently (9), which reported that CRM positivity decreased from 40.6% to 14.8%, and the incidence of IOP reduced from 22.8% to 3.7%; both of these results were statistically significant. In another multicenter study, a reduction was found in the ELAPE group as compared to standard surgery for both CRM positivity (49.6% vs. 20.3%; p<0.001) and IOP (28.2% vs. 8.2%; p<0.001) (10). Two meta-analyses revealed that the use of ELAPE produces lower rates of CRM positivity, IOP and local recurrence and that therefore ELAPE demonstrated oncological superiority over APE (11, 12). However, only one randomized, controlled trial has shown improved local recurrence rates with ELAPE (13). The results from this current study reveal that the ELAPE technique has superiority over APE in terms of CRM positivity and IOP rates, but that the differences between the two techniques is not statistically different. This could be explained by the low number of patients in each group. 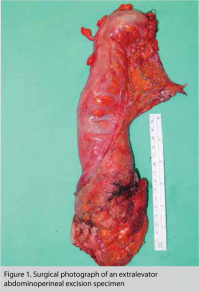 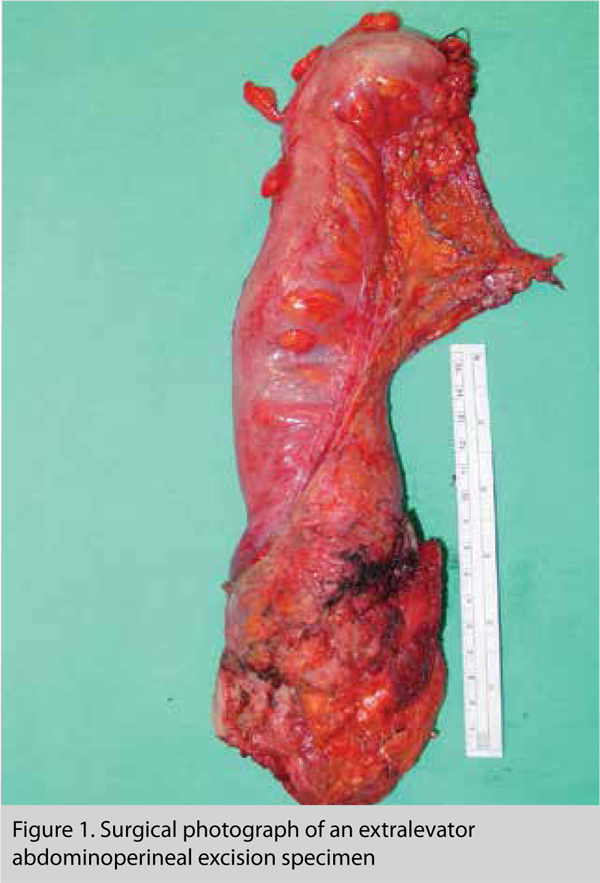 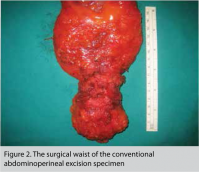 Figure 2. The surgical waist of the conventional abdominoperineal excision specimen
× 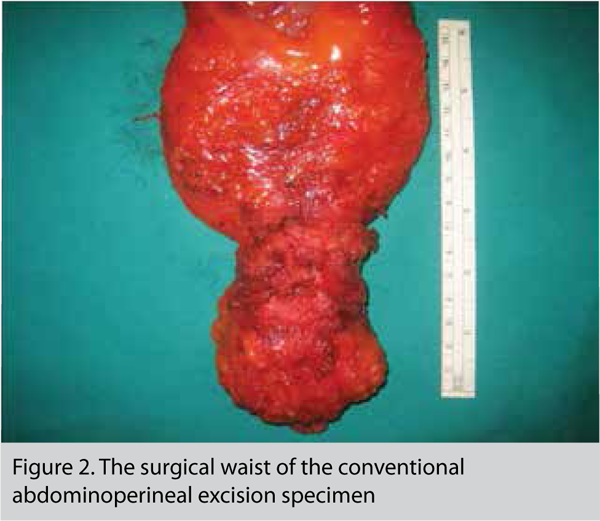 In our study, local recurrence rates were 4% for ELAPE and 3.6% for APE groups. Although patients in the APE group had lower rates of chemoradiation than those in the ELAPE group, there was no difference between the groups in terms of local recurrence rates. The major advantage with ELAPE, where one might expect to see an improvement in local recurrence and survival, is for advanced low tumors in which staying in the conventional plane will be unsafe and potentially lead to cutting through the tumor. For smaller tumors, ELAPE could cause unnecessary morbidity with no potential oncological gain. Similarly, for tumors that have responded well to neoadjuvant chemoradiation, oncological benefit to ELAPE is unlikely while morbidity will markedly increase.

The prone jack-knife position gives an excellent view for the perineal stage of the ELAPE technique. For the first time, it is possible to view the detailed anatomy of the male reproductive system during the perineal phase of the operation. This gives the opportunity to perform an optimal dissection between the embryological planes, which may decrease inadvertent bowel perforations. West et al. (10) showed that the perforation rate with ELAPE was lower using the prone jack-knife position than the lithotomy position (6% vs. 20%, p=0.027). However, other studies showed that the position of the patient was not important if the surgery is performed by a suitably trained surgeon (14, 15).

All perineal wound defects were closed primarily. Perineal wound complications occurred significantly more frequently in the ELAPE group, which may have been related to the higher rate of neoadjuvant chemoradiotherapy in the ELAPE group (16, 17). Longer operation times may also be an important factor for perineal morbidity in these patients. Pelvic floor reconstruction using various techniques has been advocated to decrease perineal morbidity (10, 18, 19). However, all of these techniques are time consuming and necessitate plastic surgery consultation.

Study Limitations
The study was limited by low number of patients in each group and its non-randomized design. Furthermore, data on APE was collected retrospectively from a historical cohort. However, we believe that it is important to analyze the results of the experience of a single surgeon, as this eliminates surgeon-related variables, such as their training level and the different patient numbers managed by different physicians (20).

The results of this study suggest that ELAPE technique was associated with less CRM positivity and reduced rates of IOP, but significantly higher rates of postoperative perineal complications occurred as compared to conventional surgery. ELAPE must be reserved for advanced low rectal cancers.

Authors declared that the research was conducted according to the principles of the World Medical Association Declaration of Helsinki “Ethical Principles for Medical Research Involving Human Subjects”, (amended in October 2013).