A 42-year-old female patient with no previous known diseases who had complaints of postprandial epigastric pain and weight loss and who could not be diagnosed by endoscopic biopsy, although gastric cancer was suspected radiologically and endoscopically, was diagnosed with primary gastric tuberculosis by laparotomy and frozen section. Following anti-tuberculosis treatment, a complete clinical, radiological, and endoscopic response was achieved.

Gastric tuberculosis is a rare condition. Its symptoms vary depending on the location; however, gastric malignancy may be suspected first due to concomitant weight loss in cases without pulmonary involvement. For patients who cannot be diagnosed by endoscopic biopsy and when malignancy is suspected, positron emission tomography-computed tomography (PET-CT) may be an option if it does not originate from the mucosa. The aim of the present article is to report a case that was suspected to have gastric cancer but could not be diagnosed by repeated endoscopic biopsy, demonstrated very high involvement on PET-CT, and was diagnosed with gastric tuberculosis by laparotomy; a complete response was achieved after anti-tuberculosis treatment.

Upper gastrointestinal endoscopy was applied to a 42-year-old female patient due to loss of appetite, postprandial epigastric pain, and weight loss. The endoscopy showed an ulcer extending into the greater curvature of the corpus, around 3 cm in diameter, with markedly elevated tissue, white exudates at the base of 8-9 mm in diameter at the center, highly depressed from the tissue and with indefinite margins that were considered to be of malignant nature. No malignancy was found from the biopsy conducted. The upper abdominal computed tomography (CT) revealed lymphadenopathy in the gastric cardia, with irregular wall thickening exceeding the serosa and with margins that could not be distinguished from the left adrenal gland. As a result of these examinations, PET-CT was performed on the patient, as malignancy was highly suspected, and revealed paratracheal, carinal, and subcarinal hypermetabolic lymph nodes, consistent with malignancy in the mediastinum. Maximum standardized uptake value (SUVmax: 14.6) and hypermetabolic soft tissue mass were consistent with malignancy in the area extending into the hepatogastric space (Figure 1). The patient was operated on due to the prediagnosis of gastric cancer. The surgical findings indicated a widely inflamed massive lesion in the gastric cardia, and the biopsy taken was sent for frozen section examination. During the biopsy, purulent discharge was drained from the mass, and the culture was sent for examination. Gastrotomy was not performed during the operation. When the result was reported as granulomatous disease (Figure 2), the operation was terminated. The pathology was reported as caseified granulomatous inflammation. The polymerase chain reaction (PCR) result was positive. The patient was administered anti-tuberculosis treatment and was closely monitored for possible perforation. After the treatment, a complete clinical, radiological, and endoscopic response was achieved (Figure 3 and 4).

Figure 1. High 18F-FDG uptake in the mediastinum and abdomen on PET/CT scan
× 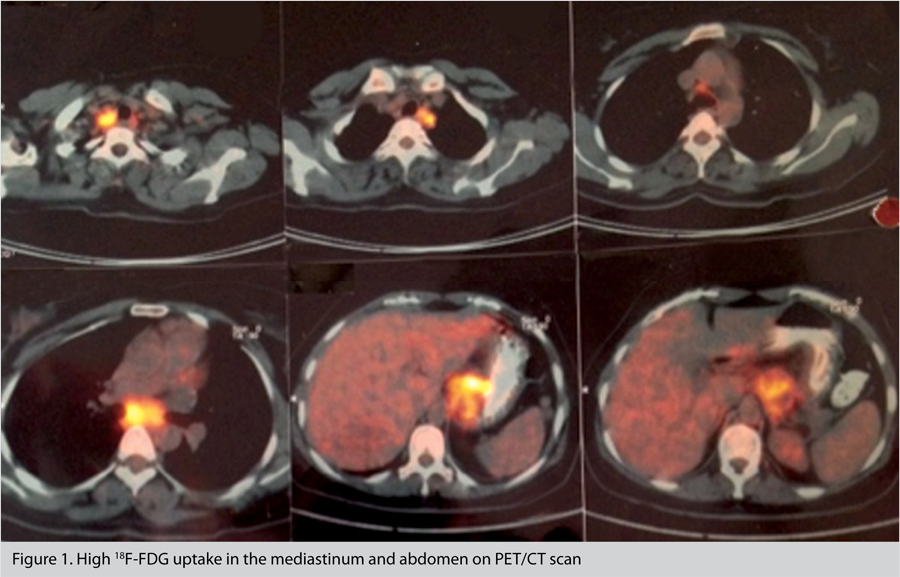 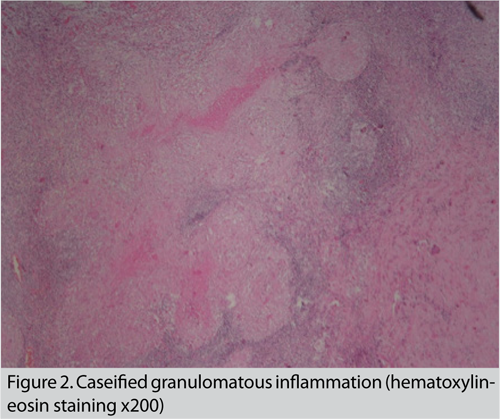 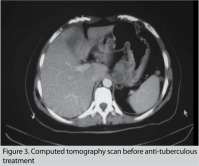 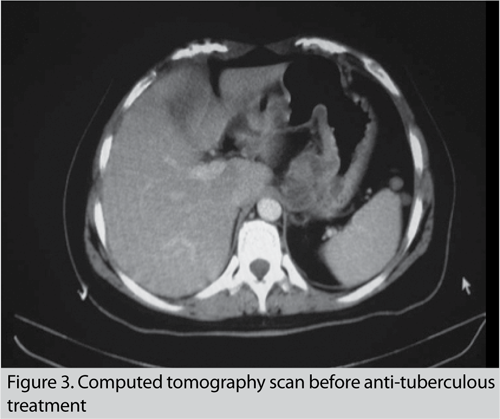 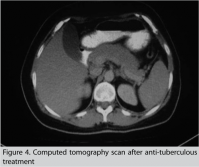 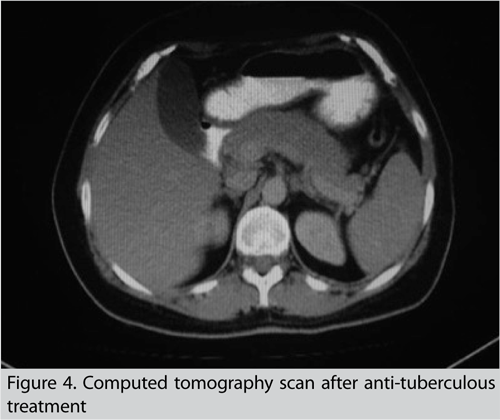 The most common cause of gastrointestinal primary tuberculosis is food infected with tuberculous bacilli consumed orally. Secondary tuberculosis occurs when patients with active pulmonary tuberculosis swallow tuberculous bacilli (1-3). This acid-resistant microorganism most frequently locates in the ileocecal region, where there are plenty of lymphoid tissues. It is rarely found in the stomach. This may be due to the bactericidal effect of the stomach and the few lymphoid tissue in the stomach (4). This bacterium generally causes disease in the elderly when the immune system is impaired or in HIV patients when the immune system is severely affected. The most common involvement is in the antrum and prepyloric region, and it leads mostly to gastric outlet obstruction (3-8). Depending on the involvement of the lymph nodes, it may cause portal vein thrombosis and even some symptoms leading to portal hypertension (4).

Gastric lesions typically cause dyspeptic complaints, and generally, peptic ulcer is suspected. If the patient has lost weight, in addition to these complaints, gastric cancer should be considered first. Gastric cancer is diagnosed by biopsy. However, diagnosis cannot always be made from the specimens taken by endoscopy. In such cases, tumors that do not originate from the mucosa, such as gastrointestinal stromal tumor (GIST) and lymphoma, should generally be considered. Some benign gastric diseases can mimic gastric cancer. If there are caseating granulomatous areas in the biopsy, gastric tuberculosis is considered. The diagnosis is made through the discovery of bacilli in the biopsy specimen. However, in some cases, when acid-resistant bacilli cannot be identified, PCR may aid in the diagnosis (9). After finding the deposition of fluorodeoxyglucose (18F-FDG) in the tissues, PET-CT has an important role in staging the malignant disease and evaluating treatment. In addition to these indications, PET-CT is also used in cases where a diagnosis cannot be made and there is a strong clinical possibility of malignancy (10). However, 18F-FDG also deposits in infections, inflammation areas, and autoimmune and granulomatous diseases (11). Therefore, the diagnosis may shift more in favor of malignancy and accelerate the process to surgery.

After the patient was discharged we decided to present this case as a case report. So that we could not take a informed consent form from the patient.