Objective: It has been proven that malnutrition increases postoperative morbidity and mortality, and it may also negatively affect wound healing in the gastrointestinal tract. In the literature, there is only one study evaluating the effects of preoperative nutritional support on colonic anastomotic healing under malnourished conditions. In order to improve the data on this topic, an experimental study was planned to evaluate the effects of preoperative nutritional support on colonic anastomotic healing in malnourished rats.
Material and Methods: The study included 18 male Wistar albino rats divided into 3 groups. The control (C) group was fed ad libitum for 21 days. The malnutrition (M) group and preoperative nutrition (P) group were given 50% of the daily food consumed by the rats in Group C for 21 days to induce malnutrition. At the end of 21 days, Group P was fed ad libitum for 7 days (preoperative nutritional support). Colonic transection and end-to-end anastomosis was performed at 21 days in Group C and Group M and at 28 days in Group P. The rats were sacrificed at postoperative 4 days, anastomotic bursting pressure was measured, and samples were taken to analyze tissue hydroxyproline levels.
Results: Anastomotic bursting pressure was significantly higher in Group C than in Group M and Group P (p<0.05), and it was significantly higher in Group P than in Group M (p<0.05). Tissue hydroxyproline levels in Group P were found to be significantly higher than those in Group M and Group C (p<0.05).
Conclusion: One week of preoperative nutritional support increases collagen synthesis in the colon and positively affects anastomotic healing under malnourished conditions.

It has been shown that malnutrition increases postoperative morbidity and mortality and prolongs the length of hospital stay in patients undergoing surgical interventions (1-4). According to the recent data, there are approximately 30 million individuals with malnutrition or nutritional risk in Europe, and it is estimated that €170 billion is spent annually for this purpose (5). The effects of malnutrition on various organ systems and wound healing have been evaluated in experimental and clinical studies; particularly, its effects on the gastrointestinal system have been emphasized (3, 6-8). Some clinical studies have indicated lower general complication rates by preoperative nutritional support in patients with malnutrition undergoing major gastrointestinal surgery (9-11). However, there is little experimental research on this topic. 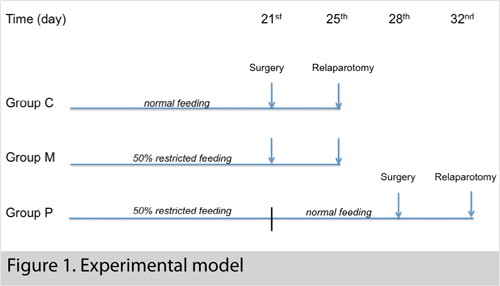 After 21 days, the rats in Group M and Group C were prepared for surgery. They were deprived of food for 12 h before the intervention, their skin was shaved, the surgical site was sterilized using 10% povidone–iodine, and laparotomy was performed through a 3-cm midline incision under general anesthesia [45 mg/kg ketamine (Eczacıbaşı, Istanbul, Turkey) and 5 mg/kg IM xylazine (Alfasan, Woerden, Netherlands)]. The caecum was identified and a 1-cm colon segment was resected 5 cm distal to the ileocecal valve, and single-layer end-to-end anastomosis was performed using 8 sutures of 4-0 prolene sutures. The abdominal layers were closed with 2-0 silk sutures, and both groups were fed ad libitum after surgery. At postoperative day 4, re-laparotomy was performed under general anesthesia. An 18 G catheter was placed 2 cm proximal to the anastomotic line. The colon was ligated with a 2-0 silk tie 2 cm distal to the anastomotic line and over the catheter. A special apparatus was used to measure the bursting pressure. The colon segment was inflated using 0.9% NaCl at 5 ml/min. The pressure values were followed-up from the monitor; a steep fall or a plateau on the curve was considered as the anastomotic bursting pressure (ABP) and recorded. After that, the rats were sacrificed using intracardiac blood aspiration. Keeping the anastomotic line in the middle, a 2-cm colon segment was resected for the measurement of tissue hydroxyproline (Hyp) levels, the sutures were removed, and the tissue was maintained at −80°C for biochemical analysis.

The test subjects in Group P also underwent the same procedures at 28 days.

Biochemical Methods
Hyp standards (2–20 µg) were prepared from the stock solution. The total volume of the standards and samples was adjusted to 50 µL with sodium hydroxide. The dry weight of the samples was measured and they were hydrolyzed by autoclaving at 120°C for 20 min. Chloramine T (450 µL) (Kimetsan, Istanbul, Turkey) was added to the hydrolyzate and the mixture was stirred slowly. In order to provide oxidation, the samples were kept at room temperature for 25 min. Ehrlich’s reagent (500 µL) was added to each sample, they were mixed, and the chromophore was developed after incubation for 20 min at 65°C. The absorbance of the reddish purple mixtures was read with a spectrophotometer (Jenway, Stafford, UK) at 550 nm and the values were presented as mg/g tissue (13).

The Kruskal–Wallis test was used to compare the 3 groups. Paired comparison of the groups was performed using the Mann–Whitney U test; intra-group comparisons were made using the Wilcoxon test.

The effects of tissue Hyp levels on ABP were evaluated by linear regression analysis.

Seven days of preoperative nutrition after 21 days of restricted feeding resulted in 20% weight increase (199.5±9.25 g) in Group P, and there was a significant difference between Group M and Group P in terms of the mean preoperative weight (p=0.012). In addition, there was a statistically significantly difference between Group P and Group C in terms of the preoperative weight (p=0.004). Weight alterations observed in the study groups during the study are summarized in Table 1.

Table 1. Weight (g) alterations in the study groups during the experiment 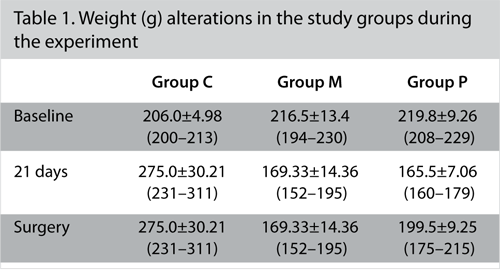 Table 2. Tissue hydroxyproline levels and anastomotic bursting pressure according to the study groups

The statistical comparison of the groups in terms of ABP and tissue Hyp levels are summarized in Figure 2.

Intestinal anastomotic healing is affected by various variables such as the primary disease, local blood flow, presence of infection, surgical technique, and nutrition status. Healing in colonic anastomosis is a more complex and slow process than that in the other regions of the digestive system. Currently, animal experiments are widely used to understand this complicated mechanism. Although colonic anastomosis is technically difficult in rats, rats were used in this research as they are easy to maintain and care for and suitable for the planned model with rapid wound healing.

There are various studies assessing the effects of malnutrition on colonic anastomotic and wound healing in the literature (6-8, 12, 14). These studies have numerous discrepancies such as in terms of the type and degree of malnutrition. Although protein malnutrition is generally induced in these studies, the parameters affecting the degree of malnutrition, such as the duration and degree of protein restriction, are different. This situation makes it difficult to compare the obtained data and to reach a common opinion. In our study, we used balanced protein–energy malnutrition by restricting all nutrients, as defined by Gonçalves et al. (12). Because induction of malnutrition was long (21 days) in this model, severe catabolic processes were avoided and therefore the loss of test subjects could be kept at minimum.

ABP and tensile strength are widely used in estimating the strength of colonic anastomosis; however, it is debatable as to which should be used as the gold standard. An experimental study involving 48 rats compared ABP and tensile strength and found no significant difference between them on postoperative day 4 (15). Law et al. (8) showed that rupture occurred somewhere outside the anastomotic line at bursting pressure measurements on postoperative day 4. Therefore, we assessed anastomotic strength on postoperative day 4 in this study. To minimize the probable measurement errors and application differences during assessment, a pressure monitor and an infusion pump were used. Thus, the results obtained in this study can be compared with those in further experimental studies.

The main mechanisms providing wound healing are the amount and nature of collagen released at the wound site. The most widely used method in estimating the amount of synthesized collagen is the detection of tissue Hyp levels. Another method that can be used is histological evaluation using fluorescent staining. However, as this method is expensive, difficult to perform, and requires special equipment and experience, tissue Hyp level measurement was decided to be used in this present study.

In the previous studies on nutritional status and intestinal wound healing, the effect of preoperative nutritional support was not evaluated. In the study by Irvin et al. (6), induction of severe protein malnutrition (weight loss: 34%) in rats was shown to negatively affect colonic anastomotic healing. In the study by Mukerjee et al. (16) in rats fed without protein supplementation, colonic tensile strength was found to be low. Ward et al. (7) included 3 groups of rats in their study. The animals in the first and second groups were fed a low-protein diet, and 12.5% weight loss, which was considered mild malnutrition, was induced. The first group was fed a normal diet after surgery, whereas the low-protein diet was continued in the second group. The animals in the third group were fed a normal diet throughout the experiment. ABP in the first and second groups (that had negative nitrogen balance) was lower than that in the control group, and early postoperative normal feeding was shown to improve this situation. No group received preoperative nutritional support in these studies.

In the study performed by Law et al. (8), colonic anastomosis was performed in rats fed a low-protein diet for 2 weeks to achieve 12% weight loss, and ABP and tissue Hyp levels were measured at days 4 and 7. Although the ABP in the experimental group was lower than that in the control group, there was no difference in tissue Hyp levels. Irvin et al. (6) determined colonic weight loss in malnourished rats and reported that this decrease was predominantly due to the loss of the non-collagen part. The authors suggested that this caused a relative increase in collagen in the colon. The higher tissue Hyp levels in Group P when compared with those in Group C and Group M in our study may be similarly explained by the relative increase in collagen.

In our study, there was a statistically significant difference between the 3 groups in terms of ABP measurements. ABP in Group P was significantly higher than that in Group M, whereas it was lower than that in Group C. However, achieving values close to the mean values obtained in Group C suggest that preoperative nutritional support positively contributes to anastomotic strength. Significantly lower values obtained in Group M compared with both Group P and Group C supports this implication.

According to the results of this study, it was concluded that preoperative nutritional support under malnourished conditions has a positive effect on colonic anastomotic healing and collagen synthesis. Evaluation of the preoperative weight, tissue Hyp levels, and ABP and the relationship between these 3 parameters indicated that the wound healing process has a highly variable nature. In malnutrition, every step of this process is negatively affected. Providing efficient and correct nutritional support is important in minimizing the negative effects of malnutrition on colonic anastomosis. However, in order to elucidate the complex process of intestinal wound healing, other variables should also be experimentally tested.