Inflammatory pseudotumor of the liver is a rare benign tumor that can be confused with malignant tumors of the liver. It is usually diagnosed after pathologic evaluation of the resected lesion. If a mass lesion in the liver is suspicious for malignancy on radiologic evaluation then surgical resection is planned for suitable patients rather than a biopsy. Inflammatory pseudotumors are similar to malignant tumors on macroscopic assessment, but microscopically they are characterized by the presence of inflammatory cells. In case of clinical or radiologic suspicion, the lesion is biopsied and once the diagnosis of inflammatory pseudotumor is made the lesion is managed by conservative-medical treatment. It must be kept in mind as part of differential diagnosis to avoid unnecessary surgery.

Inflammatory pseudotumor of the liver (IPT) is a rare benign tumor that can be confused with malignant liver tumors. The most frequent occurrence sites except the liver include the central nervous system, intestine, omentum, orbit, urinary bladder, breast, pancreas, lymph nodes, skin and soft tissue (1). Macroscopically, the lesions may mimic malignancy, the nodules can be solitary or multiple. Their size may reach up to 25 cm. Microscopically, they are characterized by fibrovascular tissue proliferation, spindle-shaped cells, myofibroblasts, and mixed inflammatory cells (plasma cells, lymphocytes, histiocytes, eosinophils) (2). A retrospective analysis of 403 patients operated on for focal liver lesions revealed an IPT incidence of 0.7% (3). There are fewer than 300 cases reported in the literature (4). In this article, we present two patients who have undergone right and left hepatectomy, respectively, with a pre-operative diagnosis of malignancy who were diagnosed with inflammatory pseudotumor of the liver on pathologic examination.

A 58-year-old man who has been followed-up for type 2 diabetes mellitus for eight years underwent abdominal ultrasound for evaluation of a 5 kg weight loss within the past 6 months that revealed a 5 cm mass in the 5th segment of the liver. His abdominal computed tomography (CT) and magnetic resonance imaging (MRI) revealed radiological findings suggesting hepatocellular carcinoma (HCC) with a hyper-vascular 5 cm mass in the 5th segment extending to the 6th segment with early washout (Figure 1, 2). The patient was planned for right hepatectomy. 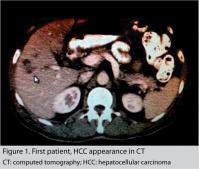 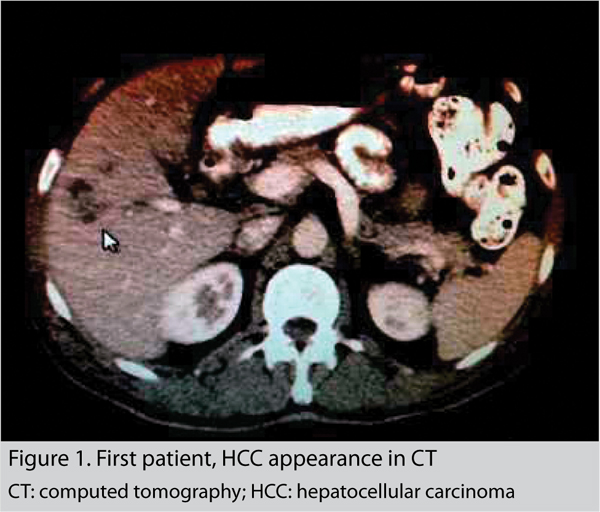 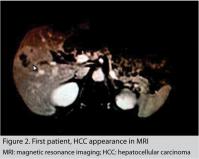 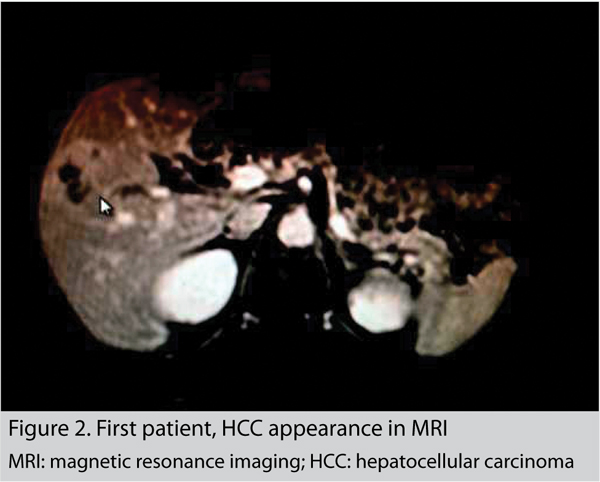 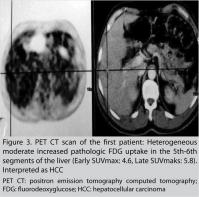 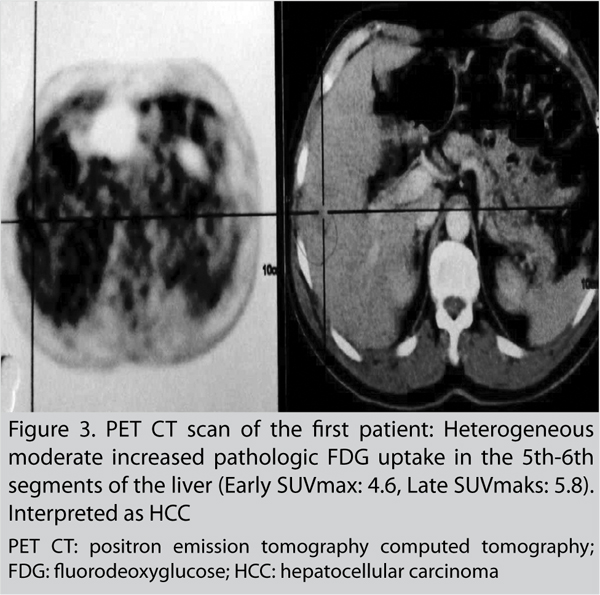 The patient underwent right hepatectomy after obtaining informed consent. He was followed-up in the intensive care unit for 12 days due to lung infection and atelectasis in the postoperative (PO) period. Oral intake was started on the 3rd PO day. He was admitted to the clinic on the 12th PO day with approximately 1000cc of ascites drainage per day. The ascites was kept under control with albumin, furosemide, spironolactone and enteral hyperalimentation. His bilirubin levels increased starting from the 2nd PO day. His laboratory results on PO day 12 were as follows: AST: 113 U/L, ALT: 82 U/L, ALP: 375 U/L, GGT: 567 U/L, T. Bil:11 mg/dL, D. Bil: 6 mg/dL, INR: 1.3 Total Protein (T.Pro): 4.4 g/dL, Albumin (Alb): 2.9 g/dL. The bilirubin level peaked at 20 mg/dL (AST: 212 U/L, ALT: 172 U/L, ALP: 261 U/L, GGT: 295 U/L) on the 30th PO day. His MR and MR cholangiography (MRCP) did not reveal intrahepatic or extrahepatic biliary dilation. There were ischemic changes in the 4th segment and the caudate lobe. The patient was considered as hepatic insufficiency at regeneration stage. The bilirubin levels began decreasing after reaching 20 mg/dL.

The patient was discharged on the 36th postoperative day. His biochemical parameters were completely normal in the second month follow-up. The patient is being followed-up for one year with no additional problems. 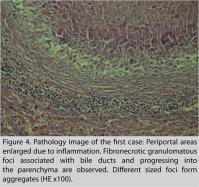 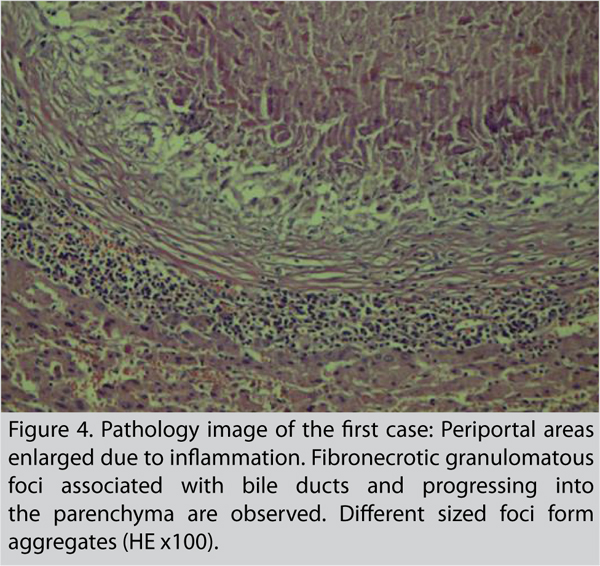 A 53-year-old male patient was admitted to the emergency department with complaints of jaundice, abdominal pain and fever, and was diagnosed with cholangitis. His past medical history included coronary bypass operation 7 years ago and insulin-dependent diabetes mellitus for 10 years.

Our case presented with cholangitis and was initially evaluated as choledocholithiasis-associated jaundice. The emergency US revealed intrahepatic biliary dilation mainly in the left lobe, the common bile duct was 6.3 mm in diameter, the gallbladder was contracted. His MR-MRCP showed distal common bile duct benign stricture, impacted stone, intrahepatic biliary dilation, and abscess mass in the left lobe (thought to be secondary to cholangitis). An endoscopic retrograde cholangiopancreatography (ERCP) was performed, with abundant sludge and microcalculi drainage following endoscopic sphincterotomy. There was no stricture that obstructed contrast passage (contradictory to MRCP findings). Intrahepatic bile ducts could not be evaluated in detail. Bilirubin values and cholestasis enzymes were slightly decreased, but there was no significant improvement. When the patient was assessed further by CT scan, the contrast enhancement pattern of the mass was found to be consistent with cholangiocellular carcinoma (Figure 5, 6). The PET-CT showed heterogeneous, intense pathologic FDG uptake (SUVmax: 17.4) with biliary tract dilation in nearly the entire left hepatic lobe. The right lobe was preserved and the findings were interpreted as cholangiocellular carcinoma (Figure 7). 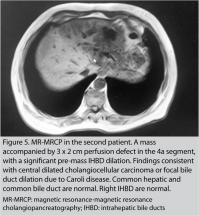 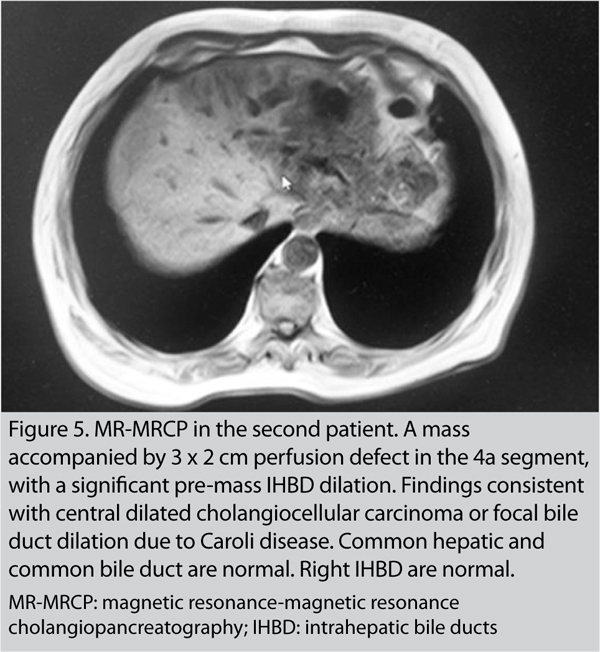 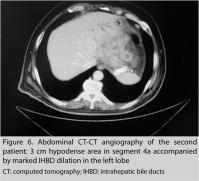 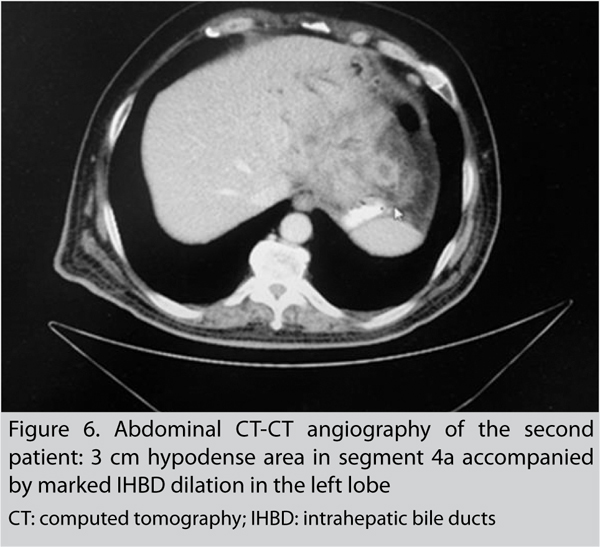 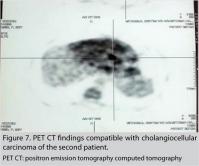 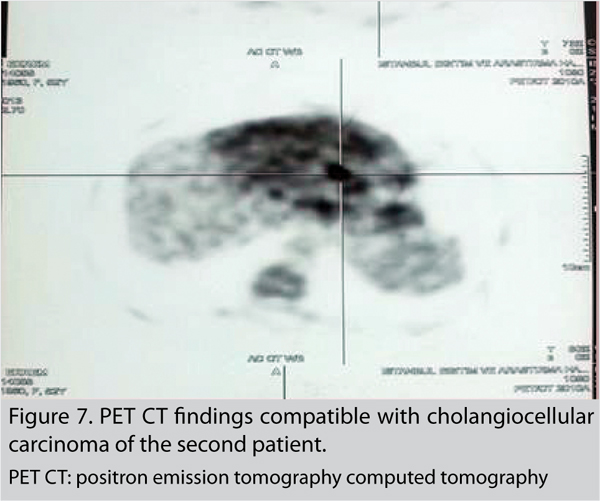 He was scheduled for left hepatectomy after obtaining informed consent. In the operation, there was extensive inflammation in the liver as well as lesions suggesting metastatic nodules in both the left and right hepatic lobes. The frozen-section evaluation of these nodules did not show apparent malignancy, nevertheless, since the suspicion of malignancy persisted, numerous biopsies were obtained and the operation was terminated. Since malignancy could not be ruled out even on biopsy materials, left hepatectomy was performed one week later.

The patient was planned for left hepatectomy with a presumptive diagnosis of cholangiocellular carcinoma.

First surgery: The patient was taken to surgery after obtaining informed consent. A small amount of ascites was detected on exploration and samples were taken for cytopathological and biochemical analyzes. The liver was completely inflamed with tumor nodules in the left lobe 2nd and 4th segments, and there were a few 1-cm nodular lesions suggesting metastasis in the right lobe 5th and 7th segments. Biopsies were obtained from segments 2, 3, 5 and 7. On frozen-section examination, the lesions were not evaluated as malignancy but as fibrosis. Since intrahepatic metastases could not be ruled out, the operation was terminated to await paraffin section examination results, which revealed active chronic inflammation, fibrosis, biliary duct proliferation, cholangitis, lobular distortion, presence of bile pigment in hepatocytes, and balloon degeneration. Ascites evaluation did not reveal any specific feature.

Conclusion: The findings were interpreted as changes secondary to bile duct obstructive neoplasia. Malignancy could not be ruled out.

As the samples obtained from the right liver did not show signs of metastasis, and the possibility of malignancy of the left lobe mass continued, the patient was scheduled for left hepatectomy one week later. Left hepatectomy was performed in the inflamed and edematous liver.
Second pathology: On gross examination, there were extensive nodular infiltration areas of 0.5-1cm in size with nodules up to 6 x 3 cm in segment 3, and of 5 x 3 cm in segment 5. The surgical margin was negative by 1.5 cm.

Clinical course: The patient was followed-up in the intensive care after both operations, and remained there for 2 days after the first surgery and 3 days after the second. He developed wound infection and ascites drainage in the postoperative period. Wound infection was controlled with antibiotics, ascites drainage was treated with albumin, furosemide, and spironolactone. There was no specific finding in his outpatient work-up.

Patients present with complaints of fever, abdominal pain, weight loss, jaundice (secondary to obstruction of intra- or extra-hepatic bile ducts by the inflammatory mass). Laboratory and radiological findings are not very specific for differential diagnosis. Biopsies may be performed to avoid unnecessary surgical intervention in suspicious contrast enhancement of the liver lesion, and in positive laboratory findings of infection, inflammation, or autoimmune diseases (6). Biopsy has complications such as bleeding, tumor seeding, and infection. Therefore, masses suggesting liver malignant tumors with typical contrast-enhancement pattern are treated by resection without biopsy. Biopsies are performed due to suspicion in masses that do not suggest malignancy by contrast-enhancement pattern (4).

In most cases, IPT is confused with other malignant tumors and is diagnosed pathologically after surgery. Surgery should be considered in case of diagnostic uncertainty and ongoing tumor suspicion (7).

Although several reports indicate no recurrence after surgical resection, there are reports on malignant transformation and recurrences even 4-7 years later (7, 10).

Inflammatory pseudotumor of the liver is a very rare condition that can be confused with malignant tumors. It is associated with infectious, inflammatory and autoimmune diseases. The tumor appearance in the liver shows contrast-enhancement pattern similar to other malignancies. IPT should be kept in mind as part of differential diagnosis in patients with systemic symptoms, laboratory or imaging findings, and unnecessary surgery should be avoided by biopsy in case of suspicion. They should be treated with conservative medical treatment (antibiotics, anti-inflammatory drugs, corticosteroids) and surgery should be applied in unresponsiveness to treatment and suspicion for malignancy. Most cases are diagnosed with pathologic evaluation after resection of a mass due to suspicion of malignancy. There are reports of recurrence and long-term malignant transformation (10), thus patients should be followed-up closely.

Written informed consent was obtained from patients who participated in this case.