The symptoms and examination findings of masses that are located in the neck region can mimic each other. Although conventional radiological methods are useful for diagnosis, the distinction between carotid body tumors and papillary thyroid cancer may be challenging. In order to eliminate this situation that may lead to technical problems during surgery, the differential diagnosis must be made carefully. The definitive diagnostic method is pathological evaluation of the excised lesion. Herein, a patient with papillary thyroid cancer mimicking carotid body tumor is presented along with the literature.

Differential diagnosis of cystic, inflammatory and neoplastic cervical masses may be challenging. These pathologies which are all located in the neck area include branchial cyst, parotid gland tumor, carotid artery aneurysm, lateral aberrant thyroid gland, malignant lymphoma, neurofibroma, tuberculous lymphadenitis and metastatic carcinomas. It should also be kept in mind that carotid body tumors and thyroid papillary cancers may also mimic one another and result in serious challenges in the differential diagnosis (1). Carotid body tumors are not encountered often, they do not cause any symptoms, have a slow growth rate and do not demonstrate malignant behavior. Patients who have a carotid body tumor often present to the hospital with a swelling in the neck, and less frequent with dizziness and syncope. They are identified as painless and slightly mobile masses with clear borders on physical examination (1). A differential diagnosis needs to be made before the operation. Papillary thyroid cancer especially has priority in differential diagnosis due to its location, its higher incidence among women and symptoms including local pain, odynophagia and dysphagia similar to enlarged carotid body tumors. Doppler ultrasonography, computerized tomography (CT), magnetic resonance (MR) angiography or digital subtraction angiography (DSA) are administered as imaging techniques used for diagnosis (2). The definitive diagnosis is made based on the operation and the pathological examination of the removed mass.

We will present in this paper a case whose preliminary diagnosis was a carotid body tumor based on both the symptoms and selective carotid angiography result, however, who turned out to have papillary thyroid cancer on pathological examination of the surgical specimen.

A sixty-eight-year-old female patient presented to our clinic due to dysphagia, hoarse voice, odynophagia, dizziness, syncope and sudden changes in blood pressure. Her physical examination revealed a pulsatile mass, approximately 5 x 3 cm in size, in the middle third section of the left sternocleidomastoid muscle. No pathological examination findings pertaining to other systems were encountered. The routine biochemistry results and blood count of the patient were normal. Furthermore, no pathologies were detected in the pre-operative thyroid function tests (TSH: 0.61 µIU/mL, sT3: 2.52 pg/mL, sT4: 1.23 ng/dL). A superficial neck ultrasonography (USG) and thyroid USG study followed by double-sided selective carotid angiography were performed to localize the mass. A homogeneously-stained lesion with smooth borders, 4 x 5 cm in size was detected at the left carotid bifurcation (Figure 1). During the pre-operative clinical work-up of the patient, she was identified to have non-positional dizziness and hyper-hypotensive attacks. There were also instant rashes in the face and neck region during these attacks. The patient was diagnosed with carotid body tumor, and was planned for surgery. An informed consent was received for the operation and potential medical publications. The patient was taken to surgery, an incision was made parallel to the left sternocleidomastoid muscle and the mass was accessed. The mass appeared to be embedded in the left carotid bifurcation, and it was observed to have invaded the left thyroid lobe on further dissection. It was seen that it had not invaded the internal and external carotid arteries, or the left common carotid artery. The removed mass was approximately 5 x 4 cm, had regular borders and was encapsulated (Figure 2). She was discharged uneventfully, on the post-operative 7th day. The pathologic examination revealed the mass to be thyroid tissue with papillary cancer. She is being followed-up together with the general surgery clinics. 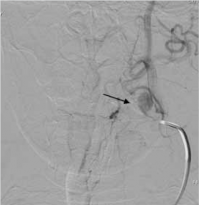 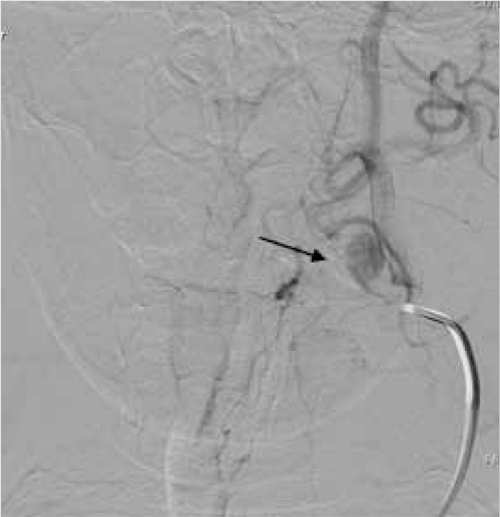 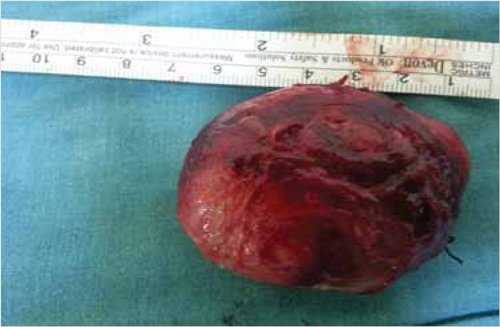 Carotid tumors originating from the carotid body are located in the carotid bifurcation. The mean age at presentation is 50, and it is seen more frequently among women. It is generally unilateral, however, it can be bilateral in 10 % of cases (3, 4). The lesions grow slowly and painlessly. The masses are mostly benign, and rarely malignant. The rate of malignancy is between 3% and 12.5% (2). They are accepted as malignant if local or distant metastases are identified. The metastases develop mostly in the local lymph nodes (5). They are generally benign tumors (97%), however, surgical resection is performed due to their potential to grow locally and aggressively (6). The carotid body tumors have a slow growth rate; therefore, they begin to trigger symptoms only once they reach a specific size. The symptoms mostly result from compression to the tenth and twelfth cranial nerves due to the anatomical proximity, and usually involve dysphagia, painful swallowing, hoarse voice, and symptoms secondary to progressive neurological deficits due to pressure on the other cranial nerves (7). The signs encountered include dysphagia and odynophagia due to the mass effect in thyroid pathologies, especially thyroid cancers. Sudden rises and falls in blood pressure due to catecholamine secretion, sudden onset facial rash, obstructive sleep apnea and palpitations may be observed in carotid body tumors. In thyroid cancers, on the other hand, similar symptoms may develop due to hyperthyroidism. In this case, it was observed that there were dysphagia and odynophagia signs due to the effect of the mass, fluctuations in favor of hypertension in the arterial blood pressure, and rashes on the head and neck. Even though the patient had symptoms, the thyroid hormones were within the normal range, which caused us to think in favor of carotid body tumor due to catecholamine discharge. However, the fact that our patient was in menopause and received hormonal therapy caused the symptoms to be misinterpreted. Failure to check the catecholamine level in routine evaluation was also misleading. Additionally, it was reported that 16% of thyroid cancers had cold nodules, 9% warm nodules and 4% hot nodules (8). No symptoms related to sympathetic discharge are encountered in cases without activity, while adrenergic responses similar to carotid body tumors are encountered in the presence of hormonal activity. This situation makes the diagnosis even more challenging. Pre-operative diagnosis in cervical lesions is beneficial in that the surgeon can take precautions against potential hemorrhage and carotid artery injury. Non-invasive methods such as ultrasonography, MR angiography and DSA provide additional information (2). The developments in tomography techniques enable assessment of bony and vascular structures adjacent to the mass, and evaluation of the presence and extent of carotid artery invasion by tomographic angiography is crucial in surgical planning. Neck and thyroid ultrasonographies were performed for the differential diagnosis in our patient. The mass could not be exactly localized by means of either technique; however, it was also stated that there were no pathologies in the thyroid tissue. A diagnosis of carotid body tumor was made based on angiography. Fine needle aspiration biopsy of these lesions is a high-risk procedure since the tumor is located near great vessels, there is a potential of bleeding into the lesion and it may provoke hormonal discharge (9). Furthermore, if fine needle aspiration is preoperatively performed for a lump in the neck, and if the mass is a carotid artery aneurysm or an elongation of the carotid, this may be very dangerous (10). Especially in tumors invading the carotid artery, biopsy is rather dangerous even if it is USG-guided. Therefore, performance of fine needle aspiration biopsy in masses close to or invading the carotid poses a risk even if it is guided by USG. The definitive diagnosis is made based on the localization of the mass, its connection with adjacent tissues and pathological diagnosis of the excised material. In this case, the mass had invaded the left thyroid lobe, as identified during the operation. However, it had not invaded the carotid artery at all. The pathological diagnosis was thyroid papillary cancer. Frozen section evaluation of such lesions may be useful. On the other hand, definitive diagnosis is made following pathological examination. As the definitive diagnosis in our patient was made after discharge, she was referred to the general surgery clinic for further treatment planning. For that reason, the approach to cervical pathologies should be multidisciplinary (11, 12). It would be useful to have general surgeons as well as cardiac surgeons in the surgical team.

Carotid body tumors are often encountered as part of cervical pathologies, especially among women. Differential diagnosis is crucial not only for planning surgery, but also for the post-operative treatment. Conventional radiologic methods may result in discrepancies in differential diagnosis. As in this case, the post-operative pathological diagnosis of the patient, who was diagnosed with carotid body tumor via conventional radiological methods, turned out to be papillary cancer. Thus, surgical approach for cervical pathologies should be multidisciplinary.