Locally advanced or metastatic disease is present in 2/3s of patients with pancreatic cancer. Pancreatic cancer patients are assessed as resectable, potentially resectable (borderline) and unresectable according to pre-operative examinations. The chance for operability may be enhanced by using adjuvant-neoadjuvant systemic chemotherapy, radiotherapy or both. The rates of R0 resection may be increased by means of treatment delivered this way. This case report presents a pancreatic adenocarcinoma case that was assessed to be resectable but was identified to be unresectable during surgical exploration, thus received adjuvant chemoradiotherapy. The patient was then re-evaluated, identified as resectable and received pancreaticoduodenectomy.

Pancreatic cancer is the 4th-5th most common tumor in many Western countries (1). Among these cancers, 75-90% of them are constituted by ductal adenocarcinoma. Its incidence is in the range of 2-15/100.000. It has a poor prognosis. The 1-year-survival rate after diagnosis is below 20%, and the average lifetime expectancy for untreated patients is reported as 6 months (2). Pancreatic cancer can rarely be diagnosed early. In 2/3 of the patients, the disease is diagnosed at a locally advanced or metastatic stage. The prognosis is associated with an R0 resection. Five-year-survival is rarely possible. The median survival rate is 12-26 months among patients undergoing R0 resection.

The cases with pancreatic cancer are assessed as being resectable, potentially resectable (borderline) and non-resectable at pre-operative examinations. There have been publications in recent years indicating that borderline pancreatic tumors could become resectable with neoadjuvant chemotherapy/radiotherapy or their combination (3). Patients with borderline resectable cancer of head of the pancreas are under high risk for positive surgical margin if it is performed before neoadjuvant treatment. Therefore, treatment should initially be started with systemic chemotherapy, radiotherapy or their combination. This way, it is ensured that R0 resections increase by means of neoadjuvant therapy.

In this article, we aimed to present the characteristics of a case that was assessed as being resectable and operated on, who was assessed as non-resectable during surgery, then became resectable following adjuvant chemoradiotherapy and received pancreaticoduodenectomy (PD).

A fifty-four-year-old male patient presented to our outpatient clinic with symptoms of abdominal, low back pain and weight loss. After abdominal ultrasonography (USG), computerized tomography (CT) and endoscopic USG, a mass at the head of the pancreas was identified. He had Type 2 diabetes in his medical history. His CEA, AFP, and CA 19-9 values were normal. Biochemically, his ALP was 134 U/L and other parameters were within normal range. The patient was admitted to surgery due to the mass at the head of the pancreas. During exploration it was identified that the mass had been localized at the head of the pancreas, invaded the retroperitoneum and infiltrated the root of the transverse mesocolon. The patient was assessed to be non-resectable based on these signs, cholecystectomy and pancreas biopsy were performed. The result of the biopsy was adenocarcinoma. Figure 1 shows the pre-operative abdomino-pelvic CT of the patient.

Figure 1. A 37 mm lesion with central necrosis is visualized at pancreas uncinate process on abdomino-pelvic CT. The fat plane between the lesion and duodenum's 3rd part is not visible
× 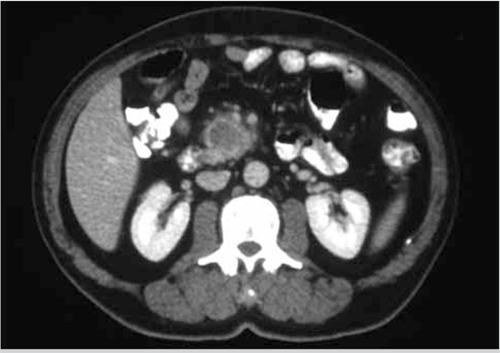 In the post-operative period, 2-week-long 5040 cGy adjuvant radiotherapy and 8 courses of 400 mg/m2 gemcitabine chemotherapy were administered over a 9-month-long period. No masses were observed in the abdomino-pelvic CT in the post-chemotherapy control (Figure 2). The patient was re-admitted for operation 10 months later. It was seen that the image of a mass extending to the transverse colon disappeared, there were no lesions extending to the retroperitoneum and the image of a mass in the pancreas disappeared; a PD was performed (Figure 3). The result of pathological study was reported as poorly differentiated ductal adenocarcinoma (along with squamous differentiation) and the pathological staging was T1N0M0 according to the TNM system. Furthermore, no tumors were observed in the stomach, duodenum, pancreatic neck, uncinate lobe and posterior pancreatic surgical borders. The patient who was observed to be disease-free without recurrence died in the post-operative 26th month. A written consent was received from the patient’s relatives for the data to be used in this case report.

Figure 2. There is no lesion in the pancreatic region on abdomino-pelvic CT
× 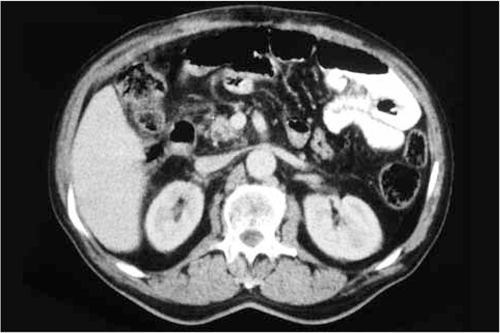 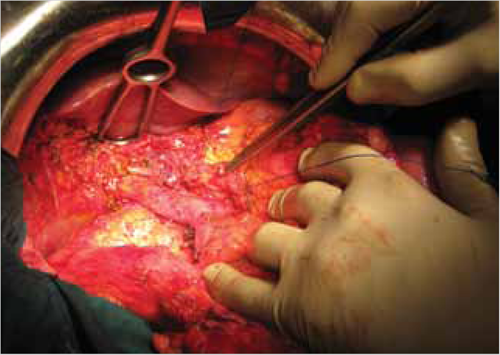 Pancreatic cancer constitutes 5% of all gastrointestinal cancers. It is the fourth leading cause of cancer-related deaths among men and the fifth among women. The incidence increases with age. It is frequent in the sixth decade of life (2). According to AJCC (American Joint Committee on Cancer), the median life expectancy after multimodal treatment in stage 1 and 2 pancreatic adenocarcinomas is 2 years. However, the results of surgical treatment in locally advanced (stage 3) patients are not promising. In these patients, the life expectancy is approximately 10-12 months in spite of chemotherapy, radiotherapy or both.

The cases with pancreatic cancer are assessed as being resectable, potentially resectable (borderline) and non-resectable at pre-operative examinations. Resectability of the current tumor depends on whether the adjacent structures have been infiltrated or not. There is a growing rate of consensus on the use of multi-detector CT in the imaging of pancreas for tumor resectability (4). Magnetic resonance imaging (MRI) is similar to tomography in terms of sensitivity and specificity. Since vascular involvement is important for resectability assessment, portal vein, SMV, SMA and celiac trunk evaluations are performed more often in radiological imaging.

Studies in recent years have demonstrated that the tumor stage could be decreased in patients identified as borderline or non-resectable by means of certain chemotherapy regimens and that the rate of survival in these resected patients was higher as compared to non-resected patients (5).

A multimodal chemoradiotherapy approach was developed at the MD Anderson Cancer Center for potentially non-resectable patients. Evans et al. (6) assessed 28 patients who received 50.4 Gy radiotherapy as well as 300 mg/m2 5-FU daily due to potentially resectable pancreatic cancer. Metastasis developed in 5 patients (18%) in total, hence, they could not be operated on and 23 patients (82%) received laparotomy following treatment. Among 23 patients who underwent laparotomy, 6 (26%) of them were found non-resectable and identified to have occult metastasis. The remaining 17 patients received PD. Three patients who underwent PD were identified to have positive surgical margins while 14 (50%) patients had negative margins. The median survival was stated as 19 months (6).

Eastern Cooperative Oncology Group (ECOG) performed 50.4 Gy RT and 1000 mg/m2 5-FU daily infusion as neoadjuvant treatment in addition to mitomycin-C 10 mg/m2 combination on days 2-5 and 29-32. ECOG PD-289 is a phase 2 study and the first neoadjuvant multimodal treatment applied in potentially resectable cancers was performed by this study group. In this study, 53 patients in total received neoadjuvant therapy due to pancreatic cancer. Twelve (23%) patients developed progression before surgery and died. Forty one patients received surgery. Twenty four (45%) patients underwent resection and the remaining patients were considered non-resectable. While the surgical margin was found positive for seven patients, 17 (32%) of them received resection with negative surgical margins. While survival was 9.7 months in the entire group, survival in 24 patients who received resection is 15.7 months (7).
Katz et al. (8) conducted a study on 160 patients with borderline pancreatic cancer where 125 (78%) patients received preoperative chemotherapy, 66 patients (41%) underwent PD, 16 of whom (27%) required vascular resection and R0 resection was performed in 94% of the patients. While the median survival rate following PD was 40 months among patients receiving pre-operative chemotherapy, it was identified as 13 months in those who did not receive it and this difference was found statistically significant.

In addition to borderline tumors, studies conducted on non-resectable tumors also offered similar results. Pancreaticobiliary Treatment Group of New York conducted three drug regimens as part of neoadjuvant therapy. In their study on 68 patients who were non-resectable according to CT, endoscopic USG, laparotomy or laparoscopy, 5-FU 1000 mg/m2 daily for 108 hours, cisplatin 100 mg/m2 daily for 28 days and streptozotocin 300 mg/m2 every 28 days on days 1-3 and 54 Gy RT were administered. Twenty two (32%) out of 68 patients showed progression during neoadjuvant therapy or did not give any objective radiological responses. Twenty two out of 46 patients underwent resection. Six out (9%) of 68 patients showed complete response. Positive surgical margins were identified in 1 out of 20 resection patients. Negative surgical margins were identified in 19 (28%) out of 68 patients. The median survival was reported as 32 months (9).

The most updated publication on this topic was published by Satoi et al. (10) Surgical treatment was performed on 58 patients responding to medical treatment over a period of more than 6 months among 150 non-resectable pancreatic cancer patients; the remaining 101 patients who did not undergo surgery were determined as the control group. Surgical mortality and morbidity values were found to be similar with those with resectable cancers (1.7%-47%). Their 1-, 3- and 5-year survival rates were 95%, 53% and 34%, respectively and this was significantly higher as compared to the control group.

In conclusion, it can be judged that surgical option should be kept in mind if there is no disease progression in the treatment process, the patient’s functional condition is suitable and there is a decrease in the CA 19-9 level rather than the radiological disappearance of vascular involvement according to Donahue et al. (11).

Another question to be asked is the timing of surgery in non-resectable tumors for which response has been received. Although there are no clear answers in relation to this situation, Satoi et al. (10) received better response in patients who had at least 240 days that elapsed following the start of treatment in their sub-group analysis and this result was attributed to the better patient selection and the higher dose of chemotherapy received. We also performed a surgical procedure in our patient 10 months after the start of treatment and we obtained a survival of approximately 26 months.

There are patients reported in the literature who were considered as either borderline or non-resectable pancreatic cancer and received resection following chemoradiotherapy, and achieved long-term survival. Although no consensus is present with regards to chemotherapy or radiotherapy being provided as combined or individually as neoadjuvant therapy, the survival period can be extended by carefully selecting patients that provided response in the treatment process as candidates for surgery and by performing surgery after they become resectable.

If disease progression is not present during the treatment process of non-resectable pancreatic tumors, the surgical option should be considered.

Written informed consent was obtained from the parents of the patients who participated in this study.