Sarcoidosis is a systemic inflammatory disease of an unknown etiology. Skin is involved in 25% of all cases, and 29% of them present as a scar sarcoidosis. Asymptomatic old-scar masses are generally regarded as a foreign body reaction by surgeons and often result in excisional biopsy. We describe a case of a patient who developed sarcoidosis in a 34-year-old appendectomy scar and adjacent inguinal lymph nodes without any local or systemic symptom and radiologic finding. Surgeons should not underestimate the importance of such lesions as a simple condition. Scar sarcoidosis may resolve spontaneously, or the treatment with some topical agents is effective. Furthermore, scar sarcoidosis may be the initial manifestation of systemic sarcoidosis.

Sarcoidosis is a systemic inflammatory disease of an unknown etiology. It can present as involvement of multiple organs with characteristic non-caseating epithelioid cell granulomas. Exogenous antigens or autoantigens can induce cell-mediated immune responses and sarcoidosis (1). Although lung is the most commonly affected organ, the first description of the disease was associated with its cutaneous manifestation. The diagnosis of sarcoidosis is made by the clinical presentation and radiologic and histopathologic findings, with demonstration of non-caseating granulomas. Here, we describe a case of a patient who developed sarcoidosis in a 34-year-old appendectomy scar and adjacent inguinal lymph nodes without any local or systemic symptom and radiologic finding.

A 53-year-old woman presented to our general surgery clinic with a 1-month history of asymptomatic palpable masses in 34-year-old appendectomy scar and right inguinal region. Physical examination revealed a 3x3-cm painless mass in the old scar, and just inferior to this incision, three 1x1-cm inguinal lymph nodes were palpated (Figure 1). The patient was receiving regular colchicine therapy for a 33-year history of familial Mediterranean fever (FMF). Erythrocyte sedimentation rate (ESR) and C-reactive protein (CRP) were normal. Chest radiograph and high-resolution CT (HRCT) were normal. The patient denied any local or systematic symptom but painless masses. The diagnosis was considered as a foreign body reaction; the informed consent was taken, and an excisional biopsy was carried out. Histopathological examination showed similar findings of non-caseating granulomatoid inflammation in both the resected cicatricial mass and adjacent inguinal lymph nodes. On microscopic examination, there were multiple granulomas consisting of epithelioid macrophages and Langhans-type giant cells, with intensive lymphocytic infiltration areas between granulomas, without evidence of necrosis (Figure 2). Staining for resistant alcohol-acid bacillus (BAAR) and fungus in the fragment was negative. The final pathologic decision was scar sarcoidosis and accompanying infiltrated lymph nodes. 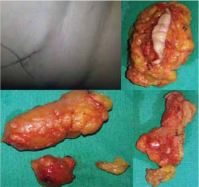 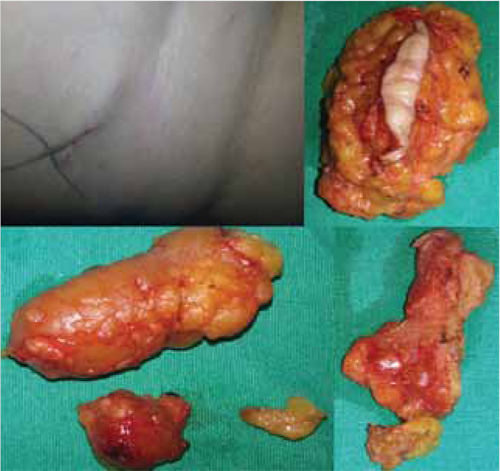 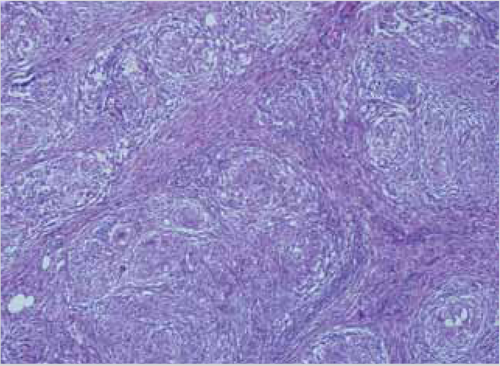 The skin is involved in 25% of sarcoidosis cases. Cutaneous sarcoidosis can present as so many polymorphous manifestations and can mimic so many diseases. Only 29% of them present as a scar sarcoidosis or cicatricial form of the disease (2). Scar sarcoidosis also has been found in intramuscular injection, tattoos, and venipuncture areas beside the old cutaneous scars (3). Time to occurrence varies from 6 months to 59 years (4). From a surgeon’s perspective, painless mass in an old scar is generally considered as a foreign body reaction, and with the request of the patient, excisional biopsy is commonly performed. This behavior is generally based on the surgeon’s definitive diagnosis estimation. In numerous conditions, except a foreign body reaction, the first-line treatment options are topical or systemic agents but not surgery. The differential diagnosis of these seemingly simple scar-related masses can be made by tru-cut biopsy. Beginning with excisional biopsy may be determined as over-treatment. The diagnosis of sarcoidosis is made histopathologically, with the appearance of non-caseating granulomas, and confirmed by the exclusion of other conditions with clinical, history, radiologic, and laboratory findings. Tuberculosis, atypical mycobacteriosis, fungal infection, rheumatoid nodules, leishmaniasis, Chron’s disease, and necrobiosis lipoidica diabeticorum must be excluded in the differential diagnosis. Scar sarcoidosis is the most clinically characteristic manifestation of the sarcoidosis and generally manifests as activation of the systemic disease. Thirty percent of patients with only cutaneous lesions and without systemic involvement may develop future systemic disease (5). Scar sarcoidosis may resolve spontaneously, or treatment with topical steroids or hydroxychloroquine is effective (2). The treatment of systemic sarcoidosis depends on the extent of the disease; prednisone remains the most common agent used. The disease tends to recur, and frequent examination is required. In the short follow-up period, after 6 months, systemic disease did not develop in our patient, but her surveillance continues.

In this particular case, a painless old-scar mass and adjacent lymph nodes were diagnosed as a foreign body reaction by our clinic, and excisional biopsy was carried out. Although a patient with an old-scar mass and without any evidence of systemic disease requires a biopsy for the tissue diagnosis, Tru-cut biopsy could be a more appropriate choice. Especially, in this case, recognition of possible lymph node involvement could alter the decision of excisional biopsy, and it is possible to prevent the patient from unnecessary surgery. A surgeon’s daily practice does not always consist of completely surgical problems. He or she must have extensive medical knowledge and a wide perspective to understand the total impact of such seemingly simple conditions and manifestation of systemic diseases. On the other hand, the association of longstanding FMF and scar sarcoidosis may be the clue to new research.