Sister Mary Joseph nodule is the umbilical metastasis detected in cancer patients. There are various theories on the formation of umbilical metastases; however, the primary focus is often placed either in the abdomen or pelvis. Its prognosis is dismal. In this article, we aimed to present a 44-year-old male patient who presented with obstruction and was subsequently diagnosed with colorectal cancer and umbilical metastasis.

Umbilical skin metastasis is referred to as ‘Sister Mary Joseph nodule’ (SMJN). Sister Mary Joseph Dempsey (1856-1939) practiced as a surgical assistant to William J Mayo at St. Mary’s Hospital in Minnesota between 1890-1915, and published the first article on this metastatic nodule in 1928 (1). The primary focus is often abdominal or pelvic organs but umbilical metastasis of hematological malignancies has also been rarely reported (2). Sister Mary Joseph nodule is a poor prognostic indicator in patients with cancer, and the survival is reported as 2 to 11 months in patients not receiving any treatment after diagnosis (3).

In this report, we presented umbilical metastasis in a 44-year-old man with newly diagnosed obstructive sigmoid colon cancer.

A 44-year-old male patient who was homeless and had poor self-care was admitted to our emergency department with abdominal bloating and change in bowel habits. On physical examination, an ulcerous nodule that was fixed to the abdominal wall was detected in the umbilicus along with abdominal distension, and decreased bowel sounds (Figure 1). There was normal stool on rectal examination. Acute phase reactants were within normal range and colonic air-fluid levels were detected on plain upright abdominal radiography. He had difficulty in defecation for the past few months, a colonoscopy has been performed in another hospital a week ago that revealed a rectosigmoid junction tumor obstructing the lumen almost completely. The endoscopic biopsy has been reported as adenocarcinoma. The patient was admitted with a diagnosis of bowel obstruction due to colorectal cancer. The thoracic and abdominal computed tomography showed diffuse intraabdominal ascites, nodular lesions compatible with multiple metastases in the liver and spleen, large areas of omental implants, peritoneal thickening, mild dilatation of the transverse and ascending colon, and a tumor mass at the rectosigmoid junction that obliterated the lumen (Figure 2). Tumor markers CA 19-9 and CEA were 1200 U/mL (0-37) and 11.3 ng/mL (0-5), respectively. On the 3rd day of his clinical follow-up the patient underwent surgery for palliative treatment due to an increase in abdominal distension and leukocytosis as well as air-fluid levels on plain upright abdominal radiography. A transverse loop colostomy was created through a 5 cm transverse left subcostal incision, and an incisional biopsy was obtained from the umbilical nodule. The cut surface of the biopsy specimen showed hyperplastic and thin epidermis. Extensive dermal tumoral infiltration that penetrated to the epidermis in a single area was detected. The tumor consisted of irregular cribriform or tubular pattern forming atypical epithelial cells with eosinophilic cytoplasm, large round nucleus, dark chromatin, with rare mitosis (Figure 3). On immunohistochemical staining, it showed cytoplasmic staining for pankeratin and cytokeratin 7 while it was negative for cytokeratin 20 and S100 (Figure 4). 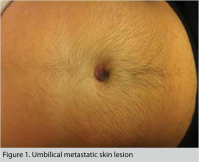 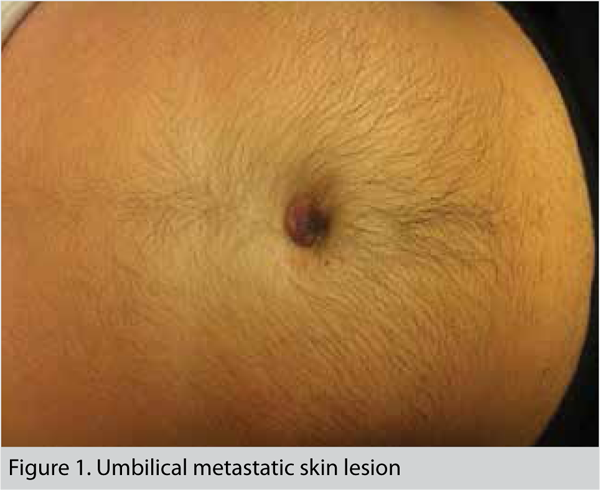 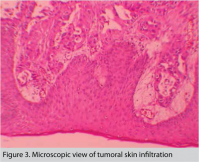 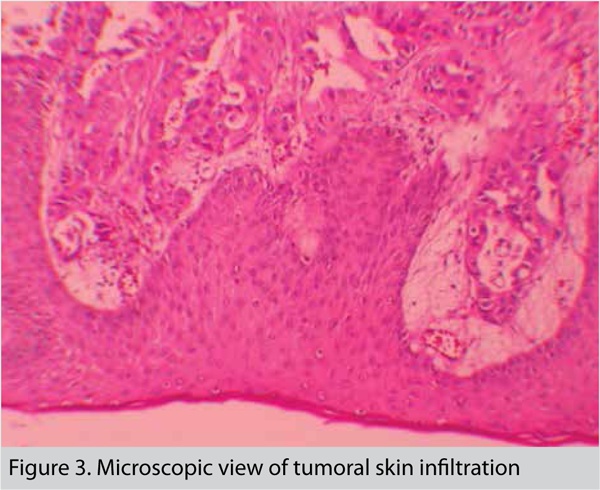 The colostomy functioned intermittently in the postoperative period due to massive malignant ascites but the signs of obstruction did not improve. Despite paracentesis once in every two days the distension could not be treated. In the first week after surgery, the patient began fecal vomiting and nasogastric decompression was performed. Despite nasogastric decompression and paracentesis the obstruction could not be treated, thus it was decided to perform laparotomy. On laparotomy, findings of peritoneal carcinomatosis and segmentary stenosis throughout the small intestine and colon due to cancer implants were observed. After the limited exploration due to carcinomatosis, a loop ileostomy was created using a suitable jejunum loop in the left lower quadrant of the abdomen, but the patient died on the 3rd day following surgery.

Umbilical skin metastasis is referred to as ‘Sister Mary Joseph nodule’ (SMJN) (1). SMJN is rarely detected at the time of diagnosis in colorectal cancer. It has been reported in the literature to be usually caused by gastrointestinal and gynecological malignancies. Umbilical metastasis in colon cancer has been first described by Walshe in 1846 (4). Case series of SMJN where the tumor originated often in the stomach, colon, ovary, pancreas, and rarely in the uterus, cervix, gallbladder and small intestine have been published (5, 6). Shetty (7) reviewed 265 cases of umbilical metastases between 1830 and 1989, and found that the primary focus was colon cancer in 17 patients. In a series of 407 cases describing the characteristics of SMJN, Galvan et al. (8) reported that 14.6% of the umbilical metastases were due to colorectal cancer. SMJN, in these patients with systemic cancer spread at the time of diagnosis, is an indicator of poor prognosis as in our case (9). The survival is reported as 2 to 11 months in patients not receiving any treatment after diagnosis (3). There are a few hypotheses for umbilical skin metastasis including direct peritoneal invasion, lymphatic and hematogenous routes. These metastatic lesions can reach the umbilicus via lymphatic ducts, embryonic venous or arterial vascular network, local invasion or iatrogenic port site implantation (10).

Surgical treatment is still controversial in this patient group with poor quality of life and limited life expectancy. Hori et al. (11) performed single port laparoscopic right hemicolectomy with local resection of the umbilical skin metastasis, but the patient died of systemic disease in the early period. Conservative and supportive treatment have been suggested in many studies. In recent years, chemotherapy and targeted therapy has been shown to significantly prolong the life expectancy and quality of life in advanced colorectal cancer (12). In this group of patients for whom surgical options are inadequate and chemotherapy is advantageous, it is more appropriate not to recommend surgery except in case of perforation, obstruction, and bleeding.

Umbilical skin metastasis is a rare clinical manifestation of pelvic and intra-abdominal malignancies. Conservative treatment should be preferred in these patients with systemic disease spread at the time of diagnosis, except in emergent surgical indications, in collaboration with oncology and pain clinics.

There is no patient consent form in this article because of the early postoperative death.