A rare cause of mechanical obstruction: Intestinal myeloid sarcoma

Myeloid sarcoma is a rare aggressive tumour that originates from immature extramedullary myeloid cells. It can be seen as a relapse in patients with acute myeloid leukaemia. Sometimes it can be seen in the form of a solid tumour without any evidence of leukaemia. A case of a 44-year-old male patient who was admitted with symptoms and signs of mechanical intestinal bowel obstruction was operated on. The operation findings showed small bowel obstruction due to a mass. The mass was then resected with end-to-end intestinal anastomosis. The resected mass pathology results were consistent with myeloid sarcoma. The post-operative period was uneventful and adjuvant therapy was applied. In this case report we aimed to evaluate the clinical signs and treatment modalities of small intestinal myeloid sarcoma.

Myeloid sarcoma (MS) is a rare and aggressive tumor (1). It arises from extramedullary immature myeloid cells (1, 2). Burns first defined this entity in 1811, later King called it as chloroma due to the green staining with myeloperoxidase (3, 4). It is usually located in the bone, periosteum, soft tissue, lymph nodes, skin, orbital cavity, paranasal sinuses, gastrointestinal tract, genitourinary tract, breast, cervix, salivary glands, mediastinum, pleura, heart, peritoneum, biliary tract, and central nervous system. However, involvement of more than two organs is quite rare (5). It can transform into acute myeloid leukemia (AML), myelodysplastic disorders or myelodysplastic syndromes (6). Sometimes it may present in the form of a solid tumor without any evidence of leukemia. In most of these patients, AML develops usually 1 to 49 months after the diagnosis of myeloid sarcoma (7). Regardless of its form, the presence of myeloid sarcoma is a sign of poor prognosis. In this case report, the clinical presentation and treatment of myeloid sarcoma of the small bowel was evaluated.

A 44-year-old male patient presented to Ege University Faculty of Medicine Hospital Emergency Service with complaints of abdominal pain, distention, nausea, and vomiting. He had been suffering from these symptoms for the past 5 months and being evaluated. He presented to the ER due to progression of his symptoms. On physical examination, there were no signs of acute abdomen. The plain abdominal X-ray showed air-fluid levels at the small bowel level and dilatation of bowel loops suggesting mechanical bowel obstruction. Abdominal ultrasonography was normal except dilated bowel loops. The abdominal computed tomography revealed wall thickening at the level of the ileal loops compatible with submucosal hematoma, and findings compatible with mechanical bowel obstruction at this level (Figure 1). There were no abnormalities in biochemical parameters. He had no co-morbidities except diabetes mellitus (DM). 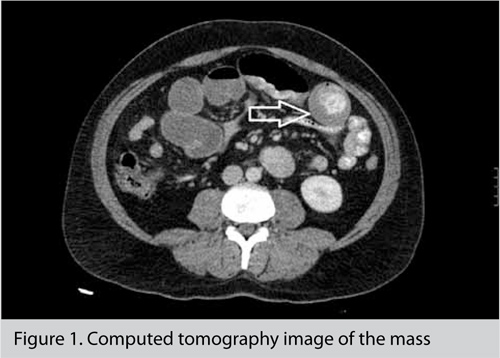 On the fifth day of clinical follow-up, surgery was planned since his symptoms did not regress. In the operation conducted in January 2012, a 5 cm mass that caused obstruction at the ileal level was detected, and a partial small bowel resection with end to end anastomosis was performed (Figure 2). The pathologic evaluation of the surgical specimen revealed myeloid sarcoma of the small bowel. Diffuse infiltration of medium-sized cells was observed throughout the entire bowel wall. Immunohistochemical examination of the neoplastic infiltration was positive for CD34, CD68, lysozyme, MPO, CD117, CD38 and bcl-2, and negative for CD2, CD3, CD4, CD8, CD10, CD20, CD56, CD57, CD79a, CD138, MUM-1, PAX5, and cytokeratin oscar. The Ki67 proliferation index was found as 70%. The patient was discharged on the seventh postoperative day after an uneventful recovery, and was referred to the Hematology Department. He received systemic chemotherapy. On his ninth postoperative month follow-up, the patient was in complete remission without signs of AML or relapse. 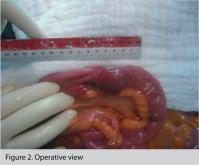 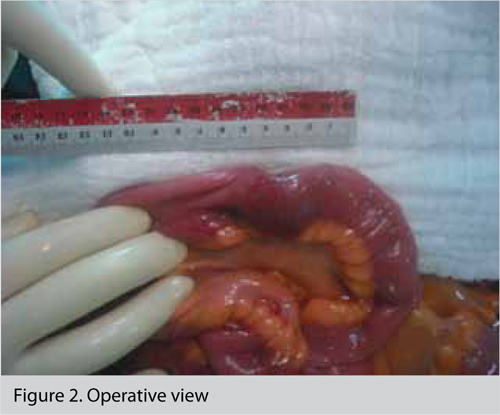 Myeloid sarcoma (granulocytic sarcoma (GS)) can be seen in patients with AML during relapse, or may be isolated as in this case. It is a very rare extra-medullary neoplasm detected in 3-4.7% of patients with myeloproliferative disorders (8, 9). The World Health Organization classifies MS that is a hematopoietic tumor under two main headings: GS is the more common form that is composed of myeloblasts, neutrophils and myeloid precursors, whereas monoblastic sarcoma is a rare form that is composed of monoblasts and is associated with acute monoblastic sarcoma (10). It is more common in children and young adults. In a Korean series of 41 patients with MS, the majority of patients were reported to be younger than 40 years (2). Myeloid sarcoma of the small bowel is very rare, the largest series reported to date included 10 patients (2). The most common locations are the skin and lymph nodes. Myeloid sarcoma of the gastrointestinal tract may macroscopically appear in the form of wall thickening, polypoid mass, exophytic mass or ulcerated lesions. Its presence in the gastrointestinal tract usually results in total or partial mechanical bowel obstruction, and acute or intermittent abdominal pain. Less common symptoms include nausea, vomiting, fever and bleeding (11). The most common site of involvement in the gastrointestinal tract is the small bowel (7, 8, 12). Rare involvements of the stomach, large intestine and appendix have been reported (11). There is generally limited involvement in MS, and involvement of more than two different areas is an unusual finding. Although lymph node involvement is common, it may not be seen in isolated MS patients without AML. Histopathologically, isolated MS can be mistaken for a variety of lymphoma and hematopoietic tumors, however, with the introduction of specific immunohistochemical markers such as myeloperoxidase, chloroacetate esterase, lysozyme, CD43, CD13, CD33, and CD117 diagnostic difficulties and errors are greatly diminished in recent years (13). Although the prognosis is variable, it is similar to AML. In patients with isolated MS, Imrie et al. (14) reported that AML developed after 9 months in average, that the mean survival was 22 months, and that local radiotherapy or surgery did not influence survival. Chemotherapy and radiotherapy, because these tumors are radiosensitive, can be implemented following surgery. The most beneficial treatment option is systemic chemotherapy. Yamauchi et al. (12) found that the mean non-leukemic period after the diagnosis of MS was 12 months in patients receiving systemic chemotherapy as compared to 3-6 months in patients without chemotherapy. Kowal et al. (15) treated an 8-year-old male patient with MS of the ileum with surgical resection, systemic chemotherapy and allogenic bone marrow transplantation, and reported that the patient remained in complete remission for 4 years without recurrence.

In patients with isolated myeloid sarcoma who have gastrointestinal symptoms (obstruction, bleeding), the most beneficial treatment option to extend the non-leukemic period after surgery and improve survival is systemic chemotherapy. Since these tumors are radiosensitive, radiation therapy can also be implemented. Patients should be informed in terms of development of AML after surgical treatment and should be under close follow up.