The role of general surgery consultations in direction of patient management

Objective: Consultation results of patients who were thought to need a surgical approach and evaluated in the General Surgery Department for diagnostic support and treatment offers after detection of clinical and/or laboratory tests were evaluated.

Material and Methods: In a six months period, 221 patients were analyzed retrospectively. There were 121 male (54.75%) and 100 female (45.25%) patients and the mean value of their ages was 46 (15-102). The departments which requested consultation, reason of consultation, test results and physical examination before consultation; required additional tests after consultation and results of consultations were reported.

Results: The majörity of consultations were from the emergency department (91.9%) and the most frequent reason was abdominal pain (21.9%). There were no tests performed before consultation in 21 percent of cases. Although physical examinations were almost 100% in judicial cases, the ratio was 35% in perianal diseases and 30% in ileus cases. Twenty-one percent of the patients with surgical pathology were operated under general anaesthesia, 9% with local anaesthesia, while elective operation was suggested in 3%.

Conclusion: Currently, it is mandatory that patient management is carried out with a multidisciplinary approach; however, we believe that we should be more selective regarding the consultation results.

Consultation defines follow-up and treatment of a patient in accordance with the clinical knowledge, experience and recommendations of physicians related to the specific condition. The patient’s physician in charge should evaluate medical history, perform physical examination and the necessary tests for diagnosis and should ask for a written consultation if he/she fails to diagnose or believes this pathology to require an intervention out of his/her primary interest; and the consultant doctor should transfer the knowledge and experience to the primary physician both in oral and written forms. Ethically, recommendations of the consultant physician should be followed in patient treatment (1, 2).

General surgery is distinctive in being the most comprehensive surgical field, interested in dealing with a wide range of diseases, from the gastrointestinal tract to the breast and endocrine system. In this study, characteristics of patients who were consulted and contribution of consultation results to the treatment were evaluated retrospectively based on patient files, in General Surgery clinics of a training and research hospital acting as a tertiary referral center.

An ethical board approval was obtained from Diskapi Yildirim Beyazit Education and Research Hospital Ethics Committee on 17.12.2012 on 06/01 with registration number. 221 patients who were consulted to the general surgery department between January 2012-June 2012 were retrospectively evaluated. Data regarding; the clinic asking for the consultation, reasons for consultation, whether the responsible physician performed a physical examination before seeking consultation or not, requirement for additional laboratory and radiological procedures, diagnoses, the final decisions and the medical/surgical treatment types were recorded.

Patient data including age, sex, type and duration of complaints, additional laboratory, radiologic or endoscopic evaluations asked by surgeons have also been recorded.

Statistical Analysis
Statistical Package for the Social Sciences (SPSS) for Windows 11.5 software was used for data analysis. Calculated values were expressed as numbers and proportions.

During the six-month study period, the general surgery clinic was consulted for 221 patients, under three main groups. Among them, 121 were male, 100 were female, and the mean age of all patients was 46 years (15-102). This parameter was 44 years for men, and 49 years for women.

The departments asking for consultation are shown in Table 1. In order of decreasing frequency, emergency services were the service asking for consultations the most with 203 patients (91.9%), while inpatient services were the second with 18 patients. Consultations from inpatient services were divided into three sub-groups. Six of them were from the intensive care unit (2.7%), 5 (2.3%) from general internal medicine clinics, 5 (2.3%) from gastroenterology, and 2 patients (0.9%) from physical therapy and rehabilitation clinics. Surgical services other than general surgery did not ask for any consultation during the study period. 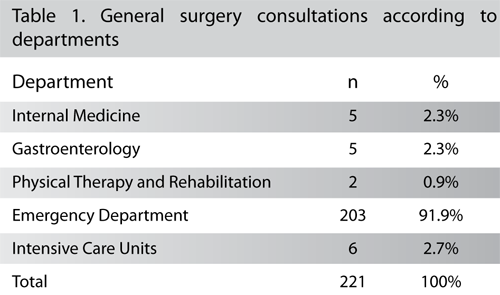 The main reasons for consultation was nonspecific abdominal pain, with 66 patients (29.9%). Detailed list of consultation reasons are given in Table 2.

It was found that in 48 cases (21.7%) no tests were done prior to consultation, in 38 patients (17.2%) only blood tests, in 7 cases (3.2%) only radiological examinations, and in 128 patients (57.9%) both blood tests and radiological examinations were done prior to surgical consult (Table 3). A detailed classification of the tests suggested in general surgery consultations are given in Table 4, it was seen that additional tests were required in 54.3% of the patients. 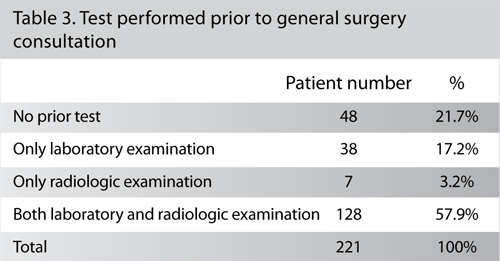 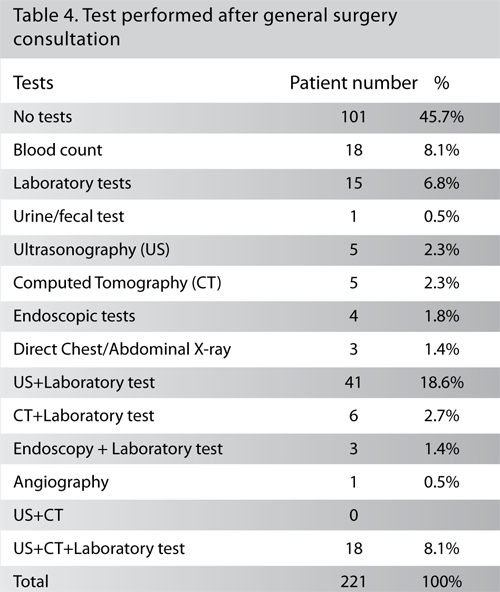 General surgical consultation resulted in the following recommendations: emergency operation (47), elective surgery (7), general surgery outpatient clinic follow-up (64), no surgical pathology (18), referred to other branches for consultation (41), requirement of further investigations (6), hospital admissions (17), transfer (1), and procedure under local anesthesia (20). Detailed breakdown is shown in Table 6. The details of 47 patients who received emergency surgery and 20 patients receiving an emergency intervention under local anesthesia are given in Table 7. 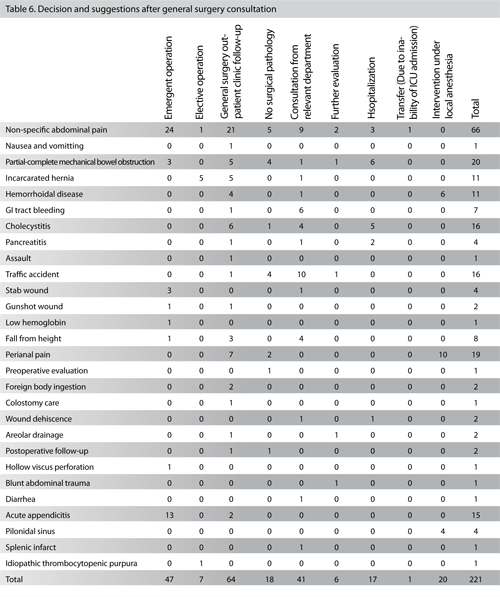 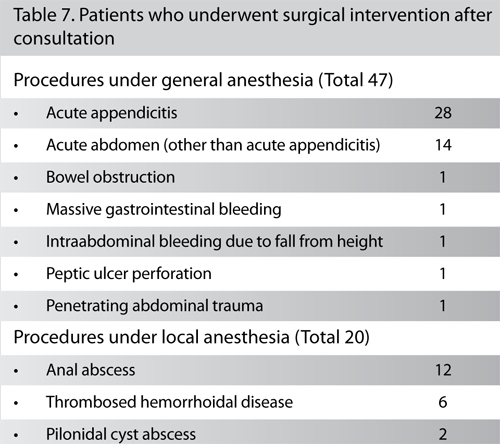 In the last years, both the areas of expertise have increased in number and specific diagnostic and treatment methods in each branch has shown tremendous growth. In patients with multiple diseases, coworking between the the related professionals is inevitable. The scientific help or advice taken from physicians specialized in an area regarding patients is referred as consultation (1-3). In our country, how a consultation should be done is explained in the items 24-30 of the Medical Ethics Regulation (4). According to this regulation; physicians may want to consult the patient and the patient has the right to request a consultation. During a consultation, discussions and reviews between physicians must be carried in such a way that the patient or his relatives could not hear and understand these. Results of a consultation should be written and signed together, and should be explained to patients by the elderly physicians without disturbing their spirituality. If the consulting physician does not agree with the current treatment, he writes his idea in the consultation paper and may not be involved in the treatment. In case of differences of opinion, if the patient prefers the thoughts of the consultant physician, the primary physician has the right to leave the patient. With advances in specialization, consultation has been one of the indispensable elements in patient-physician relationship. In complicated cases with difficulty in terms of diagnosis and treatment, more help from experts are being requested or these cases are discussed in meetings composed of experts involved in such cases. Consultation must be given proper attention and should be a part of medical education (2, 5). In our hospital, the emergency general surgery consultant physician carries a pager with different signalization according to the degree of urgency of the case, at all times. As soon as the signal appears on the pager, the consultant can obtain patient information from the system, no matter where the patient is and instantly goes by the patient.

In our study group, 92% of surgical consultations were requested by the emergency service. Emergency service is a separate discipline, led by a specialized team who directed all their energy and information to this subject. The team giving all this service in the emergency department is composed of physicians who have received special training in emergency medicine, or who are in this training (6). The study was conducted in a tertiary referral hospital, that has an emergency medicine department which is officially providing specialty training. However, since the hospital is the designated trauma center for a large province, an average of 1000 patients/day causes a significant burden. Despite the possibility of advanced investigations, it is seen that general surgery consultation is asked in all kinds of many cases irrelevant to surgery. This is not only caused by the excess workload, but also by the new Turkish Penal Code that has strong sanctions particularly in forensic cases. The concept of “having more information in the file, specifically the written note from general surgery, rather than ending up with incomplete work “ seems to be adopted . Within the first three months of this study, no surgical pathology was found in or referral to other departments was suggested for 26.7% of patients.

The most common reason for consultation was abdominal pain with a rate of 29.9%. Acute abdomen is a common presentation of a wide range of complex diseases. Despite advances in technical possibilities a high number of patients still undergoes “diagnostic laparoscopy/laparotomy” with a preliminary diagnosis of “acute abdomen” (7).
Gastroenterology department is overtaking especially upper digestive tract bleeding and with the application of endoscopy in both diagnosis and treatment, such patients are no longer consulted to general surgery or they are referred from gastroenterology after diagnosis in the emergency department. There is only one patient who was consulted to general surgery within six months.

When pre-consultation evaluations were examined, we have found that no diagnostic tests were performed in 48 patients (21.7%) prior to general surgical consultation. No additional tests were required in 101 patients (45.7%).

As a result of the consultation, 47 patients (21%) underwent interventions under general anesthesia, 20 patients (9%) received minor surgery under local anesthesia, and 7 patients (3%) were planned for an elective operation.

General surgical consultations have a major impact on patient management. It is evident that with more sub-specialization, multidisciplinary approach in patient management is inevitable. However, looking at the results of surgical consultations, the rate of patients who were found to have surgical disease was 33%, this rate goes up to 62% if those patients in whom outpatient clinic follow-up is suggested. In a similar 5-month prospective dermatology study on 336 patients, 88% of the consultations required local treatment, systemic therapy was initiated in 43%, and treatment was not recommended in 9.2% (8). In another study from Pulmonary Medicine, 398 consultations were reviewed retrospectively, and it was found that consults were asked for preoperative diagnosis in 31% and for diagnosis and treatment in 69% (9). In a similar study from Pulmonary Diseases Department including 338 patients and a 2-year retrospective evaluation, majority of the consultations were from the emergency department with 51%, and in 42% of them no pathology regarding pulmonary diseases were detected (10). In conclusion, we believe that consultation requests should be asked for in a more selective manner.